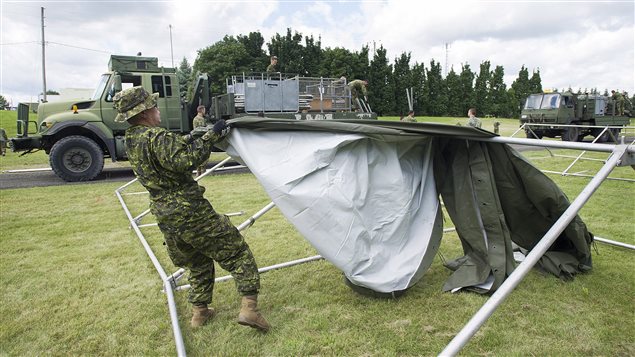 The federal government is deploying about 100 Canadian soldiers to build a temporary camp to house up to 500 asylum seekers near the Canada-United States border in Quebec.

The soldiers from Joint Task Force East will set up modular tents equipped with lighting and heating on a privately owned site leased by the government in Saint-Bernard-de-Lacolle.

The camp is being built in anticipation of a large influx of asylum seekers from the U.S., said Stéphane Malépart, a spokesperson for Canada Border Services Agency (CBSA).

The announcement comes as authorities struggle to handle a surge in people crossing from New York State to Quebec at unofficial crossings to take advantage of a legal loophole that allows them to claim asylum in Canada.

While under Canada’s Third Safe Country agreement with the U.S. asylum seekers who attempt to cross at legal border crossings are turned away at the border because the U.S. is considered a safe country, the government says under the UN Refugee Convention it is compelled to hear the asylum claims of those who cross the border through unofficial crossings and make their refugee claims inland.

With the Trump administration’s immigration crackdown this has led thousands of asylum seekers to cross the border through unofficial crossings such as the Roxham Road in St-Bernard-de-Lacolle.

Patrick Lefort, a spokesperson for the CBSA, said there are currently 700 people waiting to be processed who have crossed at Roxham Road.

“The Canadian Armed Forces are aware of the difficult situation that is requiring significant resources of Canada Border Services Agency, the Royal Canadian Mounted Police and other partners in the area of St-Bernard-de-Lacolle,” the military said in a statement.

When the camp is completed, the soldiers will return to their home base, with the exception of a few who will remain on site to maintain the military’s equipment, the statement said.

“The Canadian Armed Forces will have no role in security matters,” said Evan Koronewski, a spokesperson for the Department of National Defence. “Its staff will not participate in law enforcement tasks and will not assist civil authorities in the conduct of their law enforcement duties.”

The city’s old Royal Victoria Hospital, which closed in 2015, will also be opened up to new arrivals, provincial authorities said Wednesday.

Immigration Canada said the number of asylum seekers crossing illegally near the Saint-Bernard-de-Lacolle border crossing has quadrupled in the past two weeks from about 50 a day to 200 a day.

According to statistics provided by the federal government, from Jan. 1 to June 30 the RCMP, the federal agency responsible for border security between legal crossings, has intercepted 4,345 asylum seekers. The majority of them, 3,350, crossed into Quebec, while 646 crossed into Manitoba, and 332 people crossed into British Columbia.

Many of the recent refugee claimants crossing into Quebec are Haitians who have been living in America for years but now face deportation.

In May, U.S. President Donald Trump announced that he would not be extending temporary protection status for Haitian nationals past January, when it’s set to expire.

Canada’s own program granting Haitian nationals temporary refuge here after the earthquake has already ended, after it was extended twice by the Trudeau government.