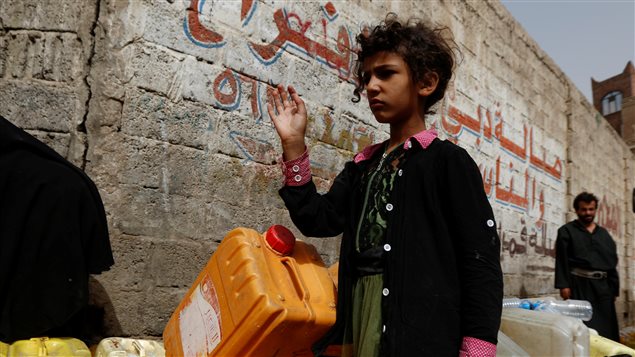 A girl stands by jerrycans on a street where a charity tanker truck delivers free drinking water, amid a cholera outbreak, in Sanaa, Yemen, July 10, 2017.
Photo Credit: Khaled Abdullah

Yemen pounded by airstrikes, withered by cholera and famine

The bloody pace of war in Yemen quickened in 2017 increasing the number of civilian deaths and forcing more people to flee their homes, even as the war-torn country deals with the world’s largest cholera outbreak, according to back-to-back reports by United Nations agencies.

The Saudi-led coalition conducted 5,676 airstrikes in the first six months of 2017, compared to 3,936 in all of 2016, according to the report by the Protection Cluster in Yemen, which is led by the United Nations High Commission for Refugees (UNHCR).

The pace of reported armed clashes between the Houthi rebels, who control most of the country’s populated areas, and the internationally recognized government of Yemen backed by Saudi Arabia and its Gulf allies is also 56 per cent higher per month in 2017 compared to 2016.

Figures released in a periodic update issued in August by the Office for the Coordination of Humanitarian Affairs (OCHA), with input from other aid agencies in Yemen, estimated the civilian death toll as of April 2017 at 8,053, with more than 45,000 injured, but the real figures could be much higher.

In the meantime, Yemen marked a grim milestone as the total number of suspected cholera cases in the country this year hit the half a million mark on Sunday. Nearly 2000 people have died since the outbreak began to spread rapidly at the end of April, according to the World Health Organization.

“This is a huge number for a poor country,” Wael Ibrahim, a Canadian who heads CARE International’s operations in Yemen, said in a phone interview from the capital Sana’a. “We need to remember that Yemen is the poorest country in the Middle East.”

The cholera epidemic has significantly worsened what was already one of the world’s largest humanitarian crisis: more than 17 million Yemenis are facing the threat of food insecurity, seven million people are severely food insecure and two million children are acutely malnourished, according to the OCHA.

Yemen’s cholera epidemic has spread rapidly due to deteriorating hygiene and sanitation conditions and disruptions to the water supply across the country because of the civil war that began in March 2015.

Millions of people are cut off from clean water, and waste collection has ceased in major cities, Ibrahim said.

With about half of Yemen’s healthcare facilities having been destroyed in the fighting or closed due to funding shortages, the country’s healthcare system has almost collapsed, Ibrahim said.

“The entire population now depends on the other 50 per cent, which lacks doctors, nurses, medical supplies,” Ibrahim said.

Highlighting the difficulty of the situation, about 30 000 critical health workers have not been paid salaries in nearly a year, Ibrahim said.

“It’s really heart breaking when you visit whatever little health facilities that function,” Ibrahim said. “They don’t have beds, the don’t have mattresses, we’ve been to health centres where patients are literally in the parking lot with family members putting a stick in order to carry a drip on it.”

‘The people of Yemen cannot bear it much longer’

But the cholera outbreak is a symptom of a larger problem which is the near-total collapse of the public services due to the ongoing civil war, Ibrahim said.

Some 15.7 million people can no longer access clean water and sanitation because infrastructure is disrupted or damaged by war.

Dr. Tedros Adhanom Ghebreyesus, WHO director-general, urged the Yemeni authorities and the rebels to find a political solution to the conflict.

“The people of Yemen cannot bear it much longer – they need peace to rebuild their lives and their country,” Tedros said in a statement.