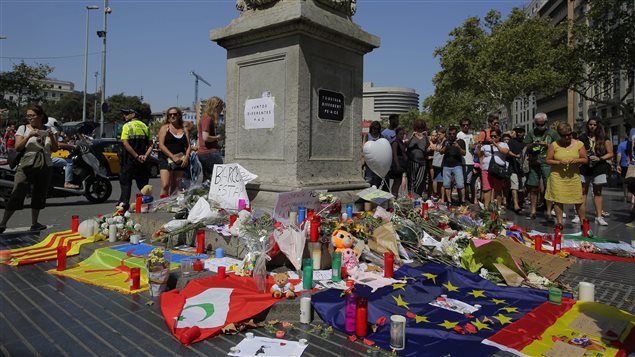 One Canadian was killed and four others injured in the deadly van attack in Barcelona on Thursday, Prime Minister Justin Trudeau confirmed Friday as he offered his condolences to the victims’ families and wished speedy recovery to the injured.

“We join Spain and countries around the world in grieving the senseless loss of so many innocent people,” Trudeau said in a statement released late Friday afternoon.

“We must stand firm against the spread of hate and intolerance in all its forms. These violent acts that seek to divide us will only strengthen our resolve.”

Earlier in the day, the Catalan regional government confirmed that Canadians were among 126 people injured in a terrorist attack in Barcelona’s busiest tourist hotspot that also claimed the lives of 13 people on Thursday afternoon after a suspected Islamist militant drove a van into crowds.

Catalan Medical Emergency Services said the victims of the attack on Barcelona’s iconic Las Ramblas street include nationals of 34 countries.

“Global Affairs Canada is communicating with local authorities in order to gather additional information and we are in contact with the family members of the affected Canadian citizens in order to provide consular assistance,” Austin Jean, a spokesperson for Global Affairs, said in an email statement sent to Radio Canada International.

For privacy reasons, Canadian officials are not able to release any further details, Jean said.

Canadian citizens in the area requiring emergency consular assistance may contact the Consulate of Canada in Barcelona at +34 93 270 3614 or, or call the government’s 24/7 Emergency Watch and Response Centre at +1 613 996 8885, Jean said. An email can also be sent to ‎sos@international.gc.ca.

Another woman died in a separate attack early Friday in the seaside resort of Cambrils, 120 km south along the coast from Barcelona, when five men attempted to drive into tourists on the city’s seafront, police said.

Spanish authorities said the two vehicle attacks — as well as an explosion earlier this week in a house in the town of Alcanar — were related and the work of a large terrorist group.

A judicial source said investigators believed a cell of at least eight people, possibly 12, may have been involved in the Barcelona and Cambrils operations and that it had been planning to use gas canisters to make home-made bombs but was thwarted by the explosion in Alcanar, depriving them of explosives for a more deadly attack.

The manhunt for one of the suspects who carried out the attack in Barcelona continues, authorities said.

Police confirmed Friday that Moussa Oukabir, 17, who is suspected of being behind the wheel of the van that rammed into the crowds of unsuspecting people on Las Ramblas, was among the five terrorists shot by police in Cambrils.

Oukabir was also suspected of using his brother’s documents to rent the van.

A fourth suspect, named as Younes Abouyaaqoub, is still unaccounted for.

Four others have been arrested, one in Alcanar Wednesday’s explosion and three in the Catalan town of Ripoll after the Barcelona attack.

Oukabir’s brother Driss, whose documents were used to rent the van, was one of them. He reportedly turned himself in, telling police he was not involved and that his documents had been stolen.

The Al-Amaq News agency affiliated with the so-called Islamic State said the militant group has claimed the responsibility for the terrorist attack as retaliation for Spain’s participation in the U.S.-led anti-ISIS coalition in Iraq and Syria.

It was the deadliest attack in Spain since March 2004, when Islamist militants placed bombs on commuter trains in Madrid, killing 191 people and wounding more than 1,800.

‘I am not afraid’

Later on Friday, residents and tourists returned to Barcelona’s famous Las Ramblas promenade where hours earlier a white van had zigzagged at high speed through pedestrians and cyclists, leaving bodies and injured writhing in pain in its wake.

As Spain began three days of mourning, people laid flowers and lit candles in memory of the victims along the promenade. Prime Minister Mariano Rajoy and Spain’s King Felipe visited Barcelona’s main square nearby to observe a minute’s silence.

Defiant crowds later chanted “I am not afraid” in Catalan.