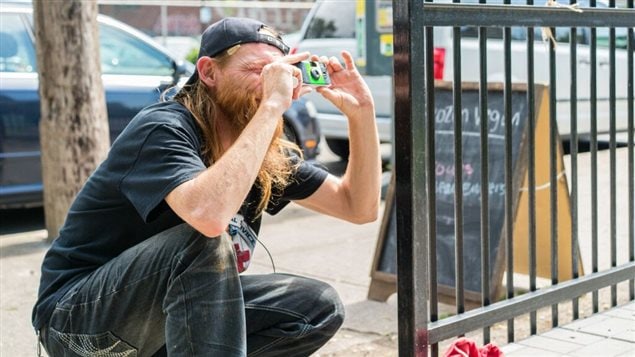 Kevin takes photos for MYTORONTO, the photo contest and calendar project, providing an opportunity for those with lived experience to take photos of people, places and things that matter to them.
Photo Credit: Warren Wagner

‘My Toronto’ offers a homeless point of view

‘MYTORONTO’ is the photography contest that 100 homeless people got involved in.

It’s described by Paula Zivet, co-chair of the project, as “a spotlight on homelessness through the art of photography”.

Managed and produced by Ve’ahavta, the Hebrew charity that works in several aspects of homelessness, the group partnered with the City of Toronto and the Alliance to End Homelessness as well as Fuji Film for this endeavour.

The idea was inspired by the original project ‘MYLONDON‘, England.

Debbie Estrin is the Director of Development for Ve’ahavta and Steering Committee member for MYTORONTO.

“We learned a lot from the experience of MYLONDON, so we had a good model to follow,” she says. And they modified it to work with the community in Toronto.

Homelessness can be defined as the continued experience of “sleeping rough or precariously housed” according to Estrin.

It all began with 100 single-use cameras distributed. 90 were returned and when the film was developed, 2400 images were revealed.

Then the challenge was to chose 40 for the upcoming exhibit, and of those, select 13 for the calendar; one photo for each month and one for the coveted spot as the cover photo,

“We had a panel of 9 different people, photography experts, we had a representative from the local arts council, a representative from the AGO (Art Gallery of Ontario), people that curate photographs, a few people with lived experience as well, and they came together, they spent about 4 hours going through all of the photographs, and they chose the photos that would go into the exhibition and into the calendar as well.” Debbie Estrin explains.

But what they chose has yet to be revealed.

Along with the positive public reaction to the project, there have been some success stories as result of the experience.

Estrin recounts the story of one young participant in the project:

“Through it she rediscovered her love of photography and she found that the project really gave her a reason to get up every morning, and so for her, the contest provided purpose for her, and really helped her to get out into community and reconnect with others, and she’s found her way and found some direction in her life.”

The exhibit will open in Toronto on October 18th running until the 22nd at the Artscape Youngplace‘.

The calendars will be available for $20 (Cdn) online and at participating locations around the city, as well as by the photographers themselves.

They will receive half the money of each calendar sold.

The City of Toronto, has lifted several of the commercial regulations to aid in the sales.

This is in an effort to help the participants economically according to Mary-Anne Bedard, the Director of Housing, Stability Policy and Strategic Investments with the City of Toronto.

The project benefits everyone by “creating conversations”‘, she said.

As one homeless man in Toronto explained, “The camera can depict other ways of seeing things. It’s like music.”