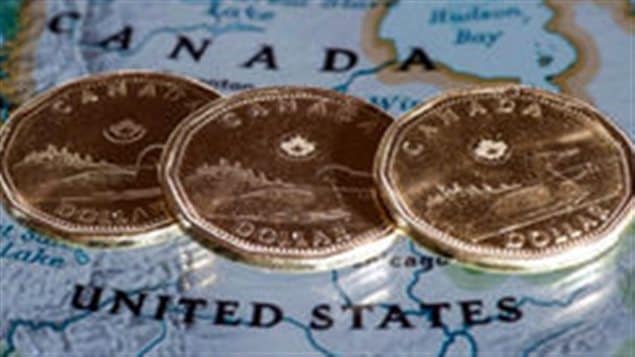 The Canadian dollar moved up over 80 cents against the U.S. dollar today, for the first time since 2015.
Photo Credit: CBC

The Canadian dollar moved up over 81 cents US today, the highest level since the summer of 2015.

Currency traders took positive economic data as a sign that the Bank of Canada will hike its benchmark interest rate again, probably next week.

Hilliard MacBeth is a portfolio manager and author of ‘When the Bubble Bursts: Surviving the Canadian Real Estate Crash“.

He has been warning about the record debt levels Canadians have taken on, in an era of easy credit and soaring house prices.

“There’s 12 or 13 million households in Canada, and about 9 million of them own the dwelling they occupy, the rest of them are renting”

He says the news earlier this week, that Canada’s economy surpassed analysts expectations, with an increase of 4.5 per cent, is good, but the details in the underlying method to reach these conclusions are not solid.

MacBeth has been researching GDP lately and a drop in price levels he says, accounted for the second quarter positive results.

And he cautions, that some of the figures that go into these GDP calculations may result in very different findings in the third and fourth quarters.

Housing, which he says, is one of the most important factors in GDP, gets reported under three components.

MacBeth says he’s not sure why they chose to include this aspect in GDP, because it could also be considered a cost, but for some reason they decided to make it a product, probably because it is an activity, he explains.

It’s in the next report that the decline in real estate transactions is going to appear because sales have really dropped, he says.

Meanwhile, the problems in Alberta, particular in the largest city of Calgary where over 30,000 full-time jobs were lost in 2016, have left many people unemployed and over 11 million square feet of optimum office space available.

“There’s a 12 or 13 million households in Canada, and about 9 million of them own the dwelling they occupy, the rest of them are renting.” MacBeth says.

According to Bank of Canada reports on indebtedness, many of the so-called Generation X-ers, people between the ages of 30 to 55, are heavily indebted.

MacBeth says as many as 10 per cent of households are living on the edge, unable to adjust to job losses, or some of the other hard times that can befall people.

And in markets where house prices may be declining, there may be challenges when people go to renew mortgages after the five year term expires.

MacBeth says the banks and lenders may be more flexible as long as people can keep making mortgage payments,

“Technically speaking there are some problems with renewing a mortgage at $600,000 (Cdn) when the dwelling is only worth $500,000 (Cdn) on the market.” MacBeth says.

It remains to be seen how the cooling mechanisms of foreign buyers taxes recently imposed in Vancouver and Toronto ultimately play out.

Will the taxes just become the cost of doing business, or will they permanently chill previously hot markets, particularly as interest rates inch up?