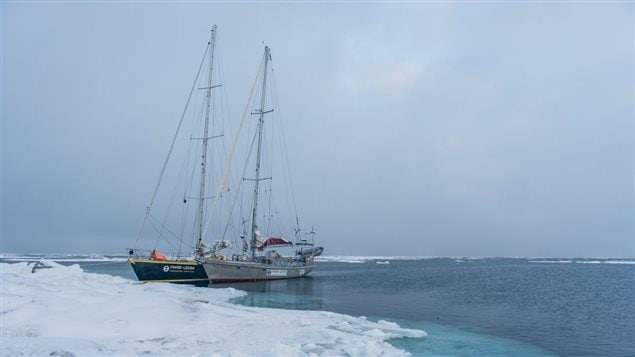 Aug 31/17: The two-15m yachts of the mission. Scientists say if the two small boats can now get this far north, so too can commercial operation including huge commercial fishing ships, and plastic waste
Photo Credit: Conor McDonnell- Arctic Mission

A British team of researchers aboard two small ice strengthened yachts have made a shocking discovery farther north than any ship has previously gone.

Headed by Exeter University biologist Tim Gordon, scientists from the U.K.,  Norway, U.S, and Hong Kong are on a mission to sail to the North Pole making scientific observations along the way.

The plastic chunks were found in a region that had previously been permanently inaccessible to ships as the sea was covered year-round by ice.

Gordon says the find of at least two large chunks of plastic foam is a worrying sign that melting ice is allowing pollution to drift into new areas in the high Arctic.

He also says that microplastics which have flowed from rivers into the Arctic had been frozen into the ice. With ice melting, they are now being released and will likely enter the food chain in the Arctic where they previously have posed little problem to the ecosystem.

The “Arctic Mission” also notes that the fact they have been able to penetrate so far north is due to global warming.

They say the environment has previously been protected by the year round ice, but if their two small 15-metre yachts can go this far north, it means the entire area is now accessible to human exploitation including commercial fishing ships.

This could bring a whole new range of problems to an environment previously protected by the cold.

The scientists are also studying the effects of human-created noise pollution, how sound travels through ice-covered and ice-free waters and how that might affect marine creatures such as narwhal and others that depend on sound to hunt for food and communicate.