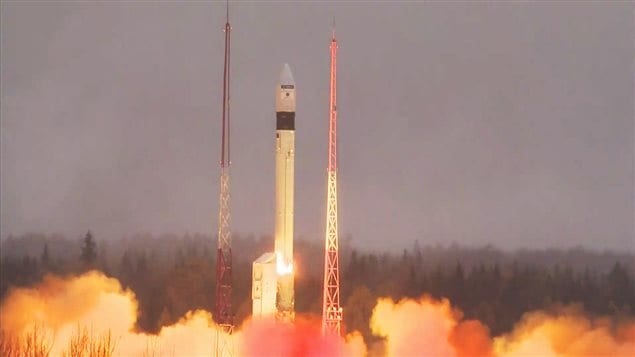 The atmosphere-monitoring satellite for Europe’s Copernicus programme, Sentinel-5P, lifted off on a Rockot from the Plesetsk Cosmodrome in northern Russia at 09:27 GMT (11:27 CEST) on 13 October 2017.
Photo Credit: Stephane Corvaja/ESA

The European Space Agency successfully launched its Sentinel-5P satellite Friday from the Plesetsk Cosmodrome in northern Russia, despite concerns by Canadian and Greenlandic Inuit that discarded parts of the rocket fuelled by a highly toxic propellant could contaminate key Arctic habitat.

The 820-kilogramm satellite, part of the ESA’s Copernicus mission, was carried into orbit on a Russian Rockot launcher at 09:27 GMT (11:27 CEST), according to the ESA.

The Sentinel-5P carries one instrument on board, called Tropomi, developed by scientists in the Netherlands. Sentinel-5P will fly on a polar orbit, circling the globe 40 times a day. It will make 20 million observations daily, building maps of polluting gases and particles known to be harmful to health.

“You have one satellite instrument measuring the complete globe – it means that you have one calibrated instrument measuring everywhere – it means that you can compare the pollution levels in Europe directly with those in China and United States,” said Pieternel Levelt, principal investigator for Tropomi and head of Satellite R&D at Dutch national weather service KNMI.

However, ironically a satellite designed to monitor environmental pollution on the Earth is itself contributing to potentially hazardous pollution, says a Canadian researcher who’s just published a peer-reviewed scientific paper on the environmental and health hazards of Rockot launchers in a prestigious science journal.

The three-stage Rockot launcher, an old Soviet SS-19 intercontinental ballistic missile (ICBM) converted for civilian use, shed its first stage over the Barents Sea, north of Norway, followed by the fairing and the second stage over the North Water Polynya in Baffin Bay, a crucial Arctic habitat located in the waters between Canada’s Ellesmere Island and Greenland.

Between them, the two stages could contain as much as eight tonnes – up to seven tonnes in the first stage and up to one tonne in the second stage – of the residual toxic hydrazine fuel as they fall to Earth, according to Michael Byers, Canada Research Chair in Global Politics and International Law at the University of British Columbia.

The potential dangers presented by space debris from the Russian rocket splashing into the Baffin Bay were presented by Byers in a scientific paper published two weeks ago in the science journal, Polar Record.

The research paper looked at the troubled history of Russian and Soviet use of hydrazine and its derivatives in Kazakhstan and northern Russia and warned of the potential for similar health and environmental effects for Canada and Greenland.

“I am disappointed with the Government of the Netherlands and the European Space Agency for proceeding with the launch despite the scientific evidence of devastating health and environmental damage caused by similar returning rocket stages in Russia and Kazakhstan,” Byers said.

“I doubt they would have proceeded with the launch if the rocket stage was being dropped in the Markermeer near Amsterdam. Yet there is an even richer ecosystem in northern Baffin Bay, and people living on its shores also.”

The next launch of a Rockot rocket on the same trajectory is scheduled for March 2018, he said.

“The Government of Canada has enough time to take firm diplomatic and if necessary economic action to stop it,” Byers said.

Canada is in the process of engaging the European Space Agency to express concerns regarding potential environmental effects of launches on the sensitive Arctic ecosystem in the North Water Polynya, said Briane Maxwell, a spokesperson for Global Affairs Canada.

The North Water Polynya, or Pikialasorsuaq as it is known in Inuktitut, is an area of year-around open water surrounded by sea ice. It is one of the most biologically productive areas in the circumpolar Arctic and is a breeding ground and migration area for animals such as narwhal, beluga, walrus, bowhead whales and migratory birds.

“Inuit communities rely on the marine wildlife for a significant part of their nutrition and the thought of hazardous rocket fuel and debris from space being deliberately deposited in the Pikialasorsuaq is unacceptable,” said Kuupik Kleist, former premier of Greenland.

Peter Freeborn, CEO of Eurockot Launch Services GmbH, the joint venture company that provides launch services from the Plesetsk Cosmodrome, said in email to Radio Canada International that concerns about environmental contamination and health effects of the highly toxic hydrazine fuel used by Rockots are unfounded.

The first stage is dropped in the Barents Sea at approximately 140 kilometres from the Norwegian coast, he said.

“Independent of the mass of the payload and independent of the mission trajectory, a Rockot mission design always includes the complete burn of fuel,” Freeborn said. “There may be slight residues with any mission, however, in the interest of mission performance the fuel mass is always minimized.”

So far, health and environmental hazards have not been identified, he said.

The second stages are dropped in the Baffin Bay area.

“All impact points are known and adhere to the existing international regulations,” Freeborn said.

“When re-entering the atmosphere the temperature rises to several hundreds of degree Celsius,” said Freeborn. “Please remember that under standard pressure, hydrazine boils at 113.5°C. The structural parts lose their integrity and by melting the destruction of the stage occurs. Six kilometres above ground the propellant components have completely burnt up.”