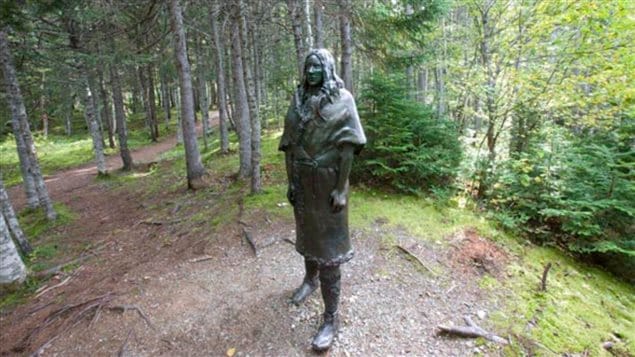 The *Spirit of the Beothuk* a slightly larger than life bronze statue by the late artist Gerald Squires, located at the Beothuk Interpretation Centre, Boyd’s Cove Newfoundland. The last known Beothuk died in 1829.
Photo Credit: seethesites.ca

It was a tragic chapter in Canadian history. An ancient aboriginal people, the Beothuk had lived on the huge island of Newfoundland for about 1,000 years. They disappeared however,  possibly due to starvation and disease within 200 years of contact with Europeans starting in the early to mid 1600’s.

The last known Beothuk was a woman known as Shanawdithit who died of tuberculosis in a St. John’s hospital in 1829.

Long before them were another people on the island known as the Maritime Archaic peoples.

Although their origins are unclear, they came into the present day area of Labrador as the massive glaciers of the ice age were retreating about 8,000 years ago. They then at some point crossed over onto the island of Newfoundland where they remained for thousands of years before disappearing or moving away long befor the Beothuk presence. For a period of some 2,000 years in between, the island was visited by Paleo-eskimo which may have been the group encountered as “skraelings”  by the Norse who tried to establish a colony on the northernmost tip of  Newfoundland at L’anse aux Meadows.

Most researchers had long believed however that the Maritime Archaic and Beothuk populations were related. The thinking was that the Archaics moved away, then returned about 2,000 years later as a new and related group, the Beothuk.

But the new research shows that not to be the case at all.

DNA samples were collected from 74 individuals including 19 Beothuk, two Paleoeskimos,   and the rest as Maritime Archaics, one taken from the oldest known burial mound in North America, at L’Anse Amour, dating to 7,714 years ago.

The DNA research carried out at McMaster University in Hamilton Ontario, shows the two peoples  were genetically distinct, which came as a bit of a surprise to researchers.

The research was published in the journal Current Biolog y under the title “Genetic Discontinuity between the Maritime Archaic and Beothuk Populations in Newfoundland, Canada” (access HERE)

Hendrik Poinar,  who is the principal investigator at the McMaster Ancient DNA Centre and senior scientist on the project  is quoted by the Globe and Mail saying, “”It means that the dynamics of what was going on back then at the furthest eastern edge of the continent was way more interesting than the typical narrow vision that we have”.

He says it is possible the Maritime Archaics moved off due to changing climate and perhaps went further south into the other present day maritime provinces and northern U.S. There is also a possibility that some Beothuk may have fled from Newfoundland southward as well.

More detailed study of Beothuk DNA and other present day aboriginal groups may lead to an understanding of who they were, where they came from and who they may be related to today. Such genetic study may also reveal where the Maritime Archaic went and who their descendants might be today.

The researchers say that such genetic research is a way to help illuminate the past. As Ana Duggan says in a quote by the Canadian Press ” What this work has shown is that DNA has the ability to answer questions that the archeological record can’t”.