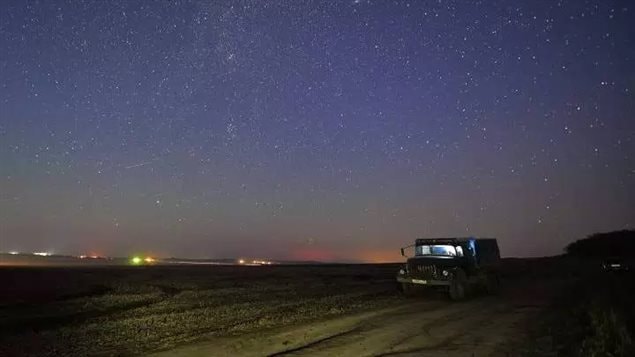 A meteor streaking across the night sky during the Orionid meteor shower in 2016.
Photo Credit: via Getty Images / Yuri SmityukTASS

Shooting stars in October, the Orionids

Shooting stars are getting more familiar by their official, or scientific names.

We’re all getting much more familiar with the Pleiades annual appearance in mid- August, also known as the Perseids.

But now October has its celestial event as well.

They’re called the Orionid Meteor Shower, and this is the big weekend for them.

It takes place as debris from Halley’s Comet passes by the earth.

Like the summer spectacle, no binoculars are necessary, just gaze up, in as secluded a spot as you can find.

Tonight, tomorrow night and Sunday night will offer the best opportunities for sightings.

In a blog post from NASA, it was suggested that those hoping to catch a glimpse of the event should look toward the star constellation Orion, specifically near its club.

The constellation is placed in the sky above Sirius, the brightest star in the sky.