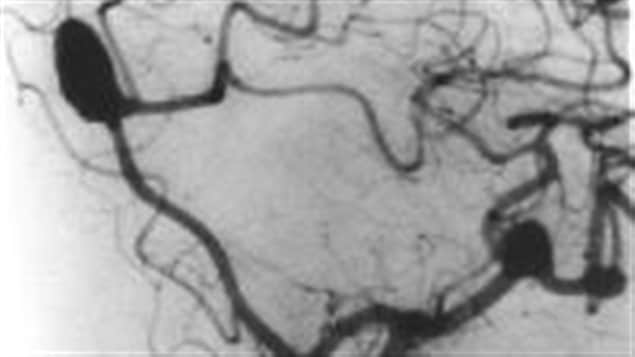 It’s called “The Ottawa Subarachnoid Hemorrhage Rule” and it was years in development.

To most people it sounds incomprehensible, but it will save some people with a brain aneurysm from a debilitating injury, or even death.

When someone arrives in the emergency room complaining of a severe headache, it’s difficult for doctors to immediately determine the severity of the situation.  It might be a migraine or similar, or it might also be a bleeding brain aneurysm, known medically as as a “subarachnoid hemorrhage”.

While these represent only one to three per cent of sudden headache cases, no doctor wants to misdiagnose a case which might lead to severe disability or even death.

The new protocol developed in Ottawa, will greatly reduce the chance of a misdiagnosis.

The research was published in the Canadian Medical Association Journal under the title, “Validation of the Ottawa Subarachnoid Hemorrhage Rule in patients with acute headache”. (full text HERE)

Dr Perry says almost half of all patients with this condition die and about 2/5 of survivors have permanent neurological deficits. Patients diagnosed when they are alert and with only a headache have much better outcomes, but can be challenging to diagnose as they often look relatively well.”

The new protocol involves six observations to easily identify a patient with a high likelihood of a bleeding or ruptured cerebral aneurysm from those with less serious conditions.

The current study involved 1153 alert adult patients with acute sudden onset headache admitted to 6 university-affiliated hospitals in Canada over 4 years from January 2010 to 2014. It is a validation of earlier published research that initially proposed the Ottawa Subarachnoid Hemorrhage Rule (SAH rule).

Using this protocol doctors have determined with a very high degree of accuracy which emergency room patients are likely to have an aneurysm requiring further immediate testing and action.

Because doctors want to err on the side of caution, many patients previously have been sent for further time consuming and costly testing which in most cases proved unnecessary and which can now be avoided. The Ottawa SAH rule is already in use at the six participating hospitals in the study.

Dr Perry says, “”We estimate that this rule could save 25 lives in (the province of) Ontario each year.”

Researchers at the Ottawa Hospital, also previously created The Ottawa Rules, which are decision tools used in emergency departments around the world to identify ankle, knee and spine fractures.