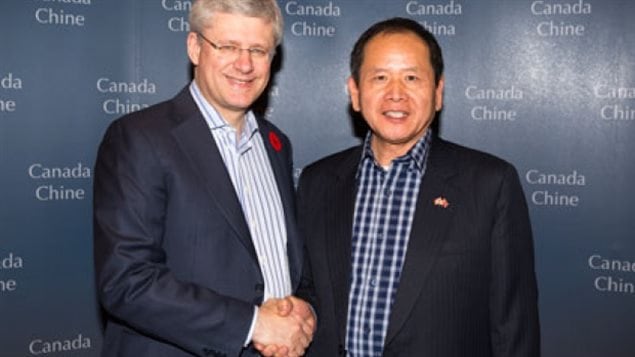 Winery owner John Chang went on a China trade mission with former Prime Minister Stephen Harper in 2014. He is now in prison in China.
Photo Credit: Office of the Prime Minister/file

A former Canadian ambassador to China says the Canadian government is not doing a good enough job of warning people of the risks of doing business in China. Chinese authorities have imprisoned Canadian wine producer John Chang for over 20 months and his wife’s passport has been confiscated because of a customs dispute. And his is not the only such case.

“My specific concern related to cases of Canadian business people…who are involved in a commercial dispute in China that suddenly becomes… a criminal matter which leads to the intimidation and sometimes the imprisonment of a Canadian,” said David Mulroney, former ambassador and now president of the University of St. Michael’s College in Toronto.

Mulroney says he had several such cases a year when he was ambassador between 2009 and 2012. He says sometimes this happens because a partner or competitor becomes jealous of the success of a Canadian business person. He adds that business people of Chinese origin seem to suffer this fate more often than others and that is unacceptable.

Trade worries could lead Canada ‘to make the wrong decision’

These concerns come at a time when Canada is considering opening discussions with China about a possible free trade agreement. Such a deal is particularly urgent since a great deal of Canada’s wealth and prosperity depends on its massive trade with the United States and the Trump administration is threatening to kill the North American Free Trade Agreement.

“There’s a danger that our anxiety about that…might lead us to make the wrong decision in China,” says Mulroney. “At the end of the day this is a wake-up call for Canada. We have to be confident. We have to lift our game when it comes to foreign policy…That means thinking of China holistically, not just as a source of opportunity, but as a source of challenges…

“We need to have a comprehensive strategy that includes thinking about consular affairs—so, how to protect Canadians in China, thinks about cyber espionage, thinks about how China has a wider impact on our foreign policy…A free trade agreement should be one element in a very comprehensive and sophisticated foreign policy that I simply haven’t seen us developing yet.”

Mulroney says Canada should work with like-minded countries to bring China to an understanding of standards and rules by which countries should operate. He believes Canada has some leverage with China given the history of Canadian figures like Dr. Norman Bethune, and former Prime Minister Pierre Trudeau who helped end China’s isolation. Added to that is the fact that Canada has no colonial past and is seen as a middle power resuming a more active role on the international stage.