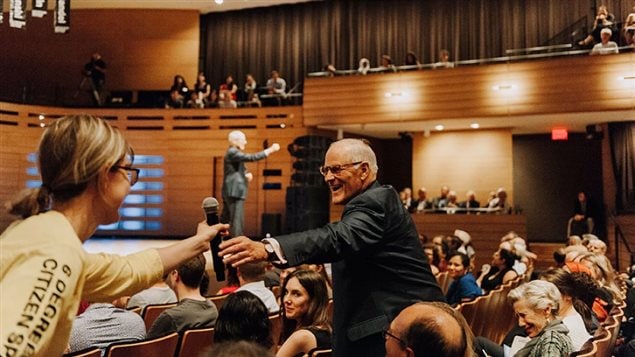 The 15th LaFontaine-Baldwin Lecture, sponsored by the Institute for Canadian Citizenship, took place in Toronto on September 25th, but this year’s edition expanded the lecture format.

The lecture is named in honour of Louis-Hippolyte LaFontaine and Robert Baldwin, two giants of Canadian history.

LaFontaine, from the largely French-speaking Montreal, and Baldwin from the younger city of Toronto, were the leaders of what’s known as the “Great Ministry” between 1848 and 1851.

The two men “established responsible government and enacted hundreds of laws. Their reforms created the roots of modern Canada by moving government away from the European model and toward the concepts of complexity and diversity,” as the ICC web site describes the duo.

“Use the market; put a price on citizenship, and sell it .”

He is well-known for his books on justice, ethics, democracy, and markets, which have been translated into 27 languages.

His course on “Justice” is the first Harvard course freely available online and on television.

CBC Radio, our public broadcaster, aired a slightly edited version of the lecture on the program Ideas, on November 28th.

Early in his talk in Toronto, Sandel framed his subject by posing these three questions:

“Why do borders seem to matter so deeply? Why is the debate over immigration so fraught?

And why is it not only about public policy; it seems to touch on resentments, anger and anxiety, why is that?

“These are dangerous times for democracy” Sandel told the capacity audience in Koerner Hall.

In a time when the discourse on the subject of immigration in the United States is reduced to rhetoric around borders, bans and walls, it was keenly noted in Canada that Donald Trump said he admired Canada’s point-system or merit-based immigration policy..

“Is citizenship a commodity?” Sandel asked the audience.

Quoting the late economist, Gary Becker, a Nobel Prize-winner at the University of Chicago who said, according to Sandel, “the way to deal with the immigration question, to cut through all of the debate and competing proposals, is simply to use the market; put a price on citizenship, and sell it.”

This was the invitation to respond. This is an excerpt of the lecture are some of the viewpoints exchanged that evening:

If you’d like to hear the lecture and discussion in full you can go to this link: