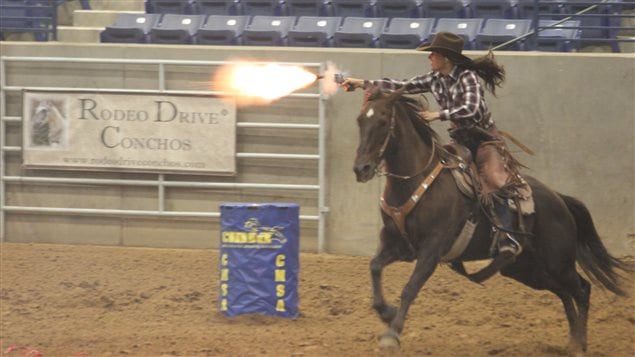 It's loud, it's fast, and boy it's fun. Cowboy mounted shooting is a sport started in the US and expanding rapidly across Canada
Photo Credit: CCMSA supplied

It’s fast, loud, challenging to do, and exciting to watch; it’s the relatively new sport of “cowboy mounted shooting”.

You have to know how to ride a horse, and be a good shot, with good reflexes. This is something you don’t have to know in order to start, but is something that can be learned, and have a heck of lot of fun while you’re at it.

Christa Paterson is the president of the Canadian Cowboy Mounted Shooting Association.

Taking its cue probably from Hollywood westerns, the sport involves riding a horse at a gallop, and taking a pistol, rifle, or shotgun, and taking shots at balloons as you gallop past.

Now shooting guns at targets is fun, and riding horses is fun, but putting them together and adding the challenge of a tight course and racing against the clock, and it’s a whole different game!

They are real guns, but fire black powder blanks. It is the sparks from the powder, that fly out between 3-5 metres that burst the balloons as the riders pass. Even though they fire blanks, because they are real guns, a permit must be obtained.

In Canada, anyone wanting to own a rifle or shotgun gun has to complete police background checks and take a classroom course before receiving a PAL- possession and acquisition licence.

Pistols are classed as restricted firearms and an additional course has to be completed to obtain an RPAL- or restricted PAL.  Safety rules are also strictly enforced around the competitions and practices.

There are several official standard patterns for the competition courses that have been established by the Association.  The competitions can then be set up in either large arenas indoors, or outdoors. The riders are timed for speed and shooting accuracy around the tight course. ..and if you drop your gun, well that’ll cost you some points too.

It certainly requires developing skills as you have to not only control a big horse as it tears around the tight course, but with a pistol, you’re doing it with one hand, and having to cock the single-action six-shooter, before each shot.

Then, still racing against the clock, you have to put the empty pistol back in its holster, pull out the other and fire off a few more shots, all again with only one hand on the horse and while at a full gallop.

Shooting the rifle and shotgun means doing all that with no hands on the reins!

As Paterson says, it’s an absolutely tremendous rush with high adrenalin levels and excitement levels just as high even as a spectator..

Another advantage is that while people might think horse riding and shooting is a man’s sport, in fact there are as many women who are doing it.  Paterson says as a family sport, it is becoming more popular exactly because of that. Instead of one person taking off for the weekend to enjoy their sport/hobby, this is a sport that both can enjoy.