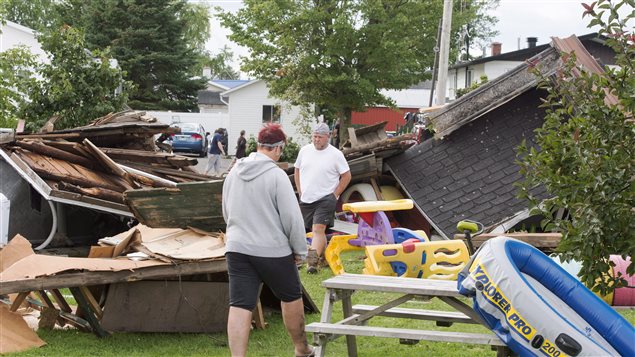 Tornadoes in Canada are not as powerful as those in the U.S. but they still can cause a lot of damage, as did this one in Lachute, Quebec in August 2017.
Photo Credit: Ryan Remiorz/The Canadian Press

Two Canadian researchers have developed a tornado-prediction method they say could provide warnings within 20 minutes and make them much more accurate.

“We have a probability of accuracy of about 90 per cent and we have a 15 per cent probability of a false detection,” says Wayne Hocking, a professor at Western University and co-author of the study with his wife, Anna Hocking a PhD and graduate of Western.

“So, that’s a particularly encouraging statistic because one of the problems of predictions which don’t work a lot of the time is that people lose faith in them and really don’t listen to them anymore. So, having a 15 per cent probability of being wrong is a good thing,” he says.

The Hockings’ method can forecast a tornado within a 100-km radius whereas current methods span a radius of several hundred kilometers. The two used special devices called VHF windprofiler radars. There are seven of these at different places in southern regions of the provinces of Ontario and Quebec. They were set up by the Hockings with grant money from government and a non-profit. They are now owned by the Hockings and are expensive to operate.

The radars measure wind and turbulence through the upper atmosphere, troposphere and lower stratosphere. The Hockings collected and analyzed 16 years of tornado data and correlated that with real-time and archived data from the radars to test how useful they could be in predicting tornadoes. Their findings were positive but they would like to do much more research to see if they could be used elsewhere.