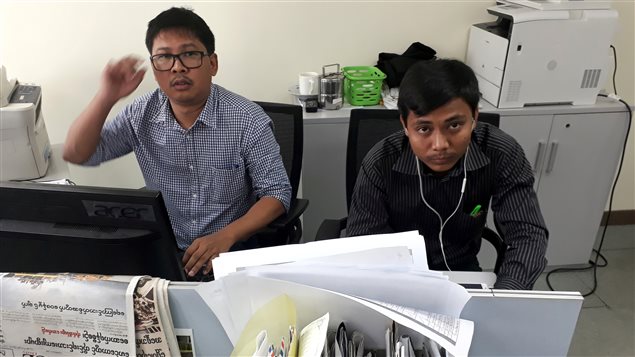 Reuters journalists Wa Lone (L) and Kyaw Soe Oo, who are based in Myanmar, pose for a picture at the Reuters office in Yangon, Myanmar December 11, 2017.
Photo Credit: Reuters Staff

The federal government is adding its voice to a growing chorus of international concern and condemnation over the arrest and detention of two Reuters journalists by authorities in Myanmar last last week.

Wa Lone and Kyaw Soe Oo went missing on Dec. 12 after they had been invited to meet police officials over dinner on the outskirts of Yangon.

The reporters had been working on stories about a military crackdown on the Rohingya Muslim minority in Rahkine State that has caused almost 650,000 people to flee to neighboring Bangladesh.

Myanmar’s Ministry of Information said in a statement on Dec. 13 that the Reuters journalists and two policemen faced charges under the British colonial-era Official Secrets Act. The 1923 law carries a maximum prison sentence of 14 years.

The reporters “illegally acquired information with the intention to share it with foreign media”, the ministry said in its statement, which was accompanied by a photo of the two reporters in handcuffs.

“Canada is deeply concerned by the arrests of Wa Lone and Kyaw Soe Oo, in Myanmar and requests their immediate release,” said in a statement Foreign Affairs Minister Chrystia Freeland, herself a former Reuters journalist.

“Respect for human rights and for freedom of the press are essential for democracy. Journalists should have the ability to report the facts and bring into the public domain current events without obstruction.”

The United States, Britain, the European Union, as well as UN Secretary General Antonio Guterres have also called on Myanmar to release the two journalists.