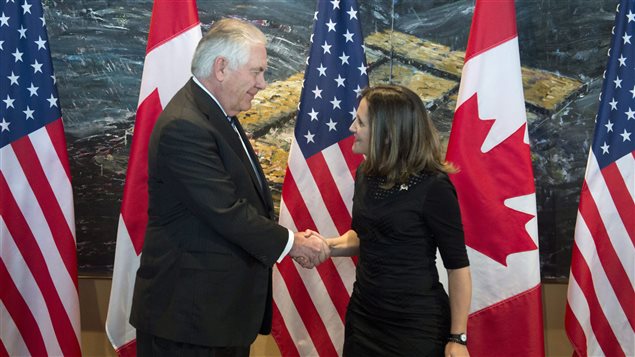 Canada, U.S. to co-host meeting on North Korea in Vancouver

North Korea dominated discussions between U.S. Secretary of State Rex Tillerson and Canada’s Foreign Affairs Minister Chrystia Freeland during his first official visit to Canada on Tuesday as the two countries vowed to continue to look for a diplomatic solution to the crisis that threatens the world with nuclear Armageddon.

To further that goal Canada and the U.S. will co-host an international meeting in Vancouver on Jan. 16, to discuss ramping up pressure on North Korea to abandon its nuclear and ballistic missile programs, Freeland told reporters during a joint press conference in Ottawa.

The so-called Vancouver Group meeting will include the original states that sent troops to fight in the 1950-53 Korean War under the United Nations Command, as well as representatives from the Republic of Korea, Japan, India and Sweden, added Tillerson.

“We continue to find ways to advance the pressure campaign against North Korea, and send a unified message from the international community: ‘We will not accept you as a nuclear weapons nation,’” Tillerson said.

“We share one goal, full and complete and verifiable denuclearization of the Korean peninsula.”

He said the meeting in Vancouver will send a message to North Korea that the rest of world is prepared to talk but is waiting for Pyongyang to show its willingness to pursue a diplomatic solution to the crisis.

“We can’t talk unless North Korea is ready to talk. We’re waiting for them to indicate a readiness to talk — this pressure campaign will not abate. We will not be rolling any of it back it will only be intensified as time goes by and it will remain in place until they agree to give up their nuclear weapons and allow us to verify that that is in fact what they have done,” Tillerson said.

It is important for the international community to demonstrate solidarity on this issue, said Freeland.

“It’s very important… to demonstrate to North Korea that this is truly a global issue, that the international community is united in condemning North Korea’s actions and in understanding them as a threat to our shared security,” Freeland said.

The two top diplomats also discussed a smorgasbord of bilateral and international issues ranging from the North American Free Trade Agreement (NAFTA), the situation in Venezuela, the ethnic cleansing of Rohingya Muslim minority in Myanmar and the Russian intervention in Ukraine, Freeland said.

“We had positive discussions about the Canada-U.S. relationship, including border management and security, North American defence, energy security and environmental cooperation,” Freeland said.

“On NAFTA Canada’s priority continues to be maintaining the achievements that have bought 23 years of predictability, openness and collaboration to North America and support so many jobs on both sides of the border.”

Tillerson arrived in Ottawa Tuesday for meetings with Freeland and other Canadian officials, including a dinner-time meeting with Prime Minister Justin Trudeau at the conclusion of his half-day visit.

Marius Grinius, Canada’s former ambassador to both South and North Korea and a Fellow with the Canadian Global Affairs Institute, said the government of Prime Minister Justin Trudeau is attempting to find a role for Canada in trying to defuse the North Korean crisis before it turns into an all-out war with the potential for a nuclear exchange between Pyongyang and Washington.

However, it’s not clear what possible role can Ottawa play, Grinius said.

Yet, after years of non-engagement with North Korea under the previous Conservative government of Prime Minister Stephen Harper and, until very recently the Liberal government itself, Canada has lost a lot of expertise and has been marginalized on the North Korean file, Grinius said.

“We’ve lost a lot of credibility and even expertise on North Korea, so we’re back in the game and hopefully will be able to contribute in terms of diplomacy, being a bridge builder, honest broker, all of those things,” Grinius said. “But it means a heck of a lot of work.”