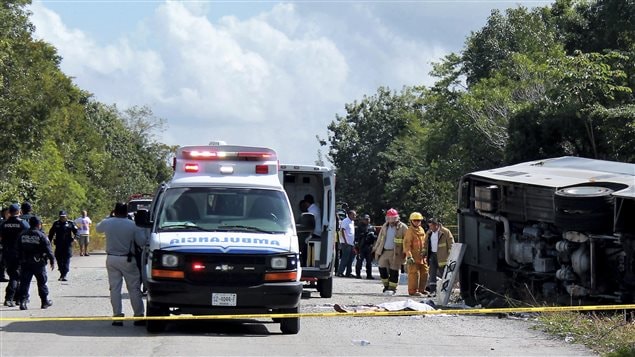 The lifeless body of a passenger lies next to an overturned bus, as ambulances, firefighters and police stand by in Mahahual, Quintana Roo state, Mexico, Tuesday, Dec. 19, 2017. The bus carrying cruise ship passengers to the Mayan ruins at Chacchoben in eastern Mexico flipped over on the highway early Tuesday.
Photo Credit: (Novedades de Quintana Roo via AP)

One Canadian was killed and three others injured in Tuesday’s fatal tour bus crash that took the lives of 12 people in Quintana Roo, in eastern Mexico, Canadian officials confirmed Wednesday.

Mexican authorities said 18 other people were injured in the accident. The tour bus was transporting cruise ship passengers from two Royal Caribbean cruise ships, the Celebrity Equinox and Serenade of the Seas, to Mayan ruins at Chacchoben, about 175 kilometres south of Tulum, when it flipped over on the highway, authorities said.

“Our thoughts and deepest sympathies are with the family and friends of the Canadian who died in a bus crash in Mexico, and we wish a speedy recovery to the three Canadians injured,” said Global Affairs Canada spokesman Philip Hannan.

Consular officials in Ottawa and in Playa del Carmen, Mexico are in contact with affected Canadian citizens as well as family members and are providing consular assistance as required, Hannan said.

Officials refused to give further details due to privacy considerations.

Canadian citizens seeking consular assistance should contact the Consular Agency of Canada in Playa del Carmen at 52 (984) 803-2411 or call the department’s 24/7 Emergency Watch and Response Centre at +1 613 996 8885 (collect calls are accepted where available), Hannan said. An email can also be sent to sos@international.gc.ca.