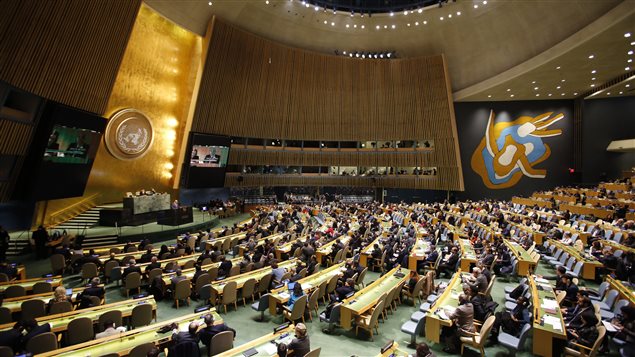 People gather at the General Assembly, prior to a vote, Thursday, Dec. 21, 2017, at United Nations headquarters. President Donald Trump’s threat to cut off U.S. funding to countries that oppose his decision to recognize Jerusalem as Israel’s capital has raised the stakes in Thursday’s U.N. vote and sparked criticism of his tactics, with one Muslim group calling it bullying or blackmail.
Photo Credit: Mark Lennihan

Canada was among 35 countries that abstained from the United Nations’ General Assembly vote on U.S. President Donald Trump’s decision to recognize Jerusalem as Israel’s capital and move its embassy there.

Nine countries voted against the motion, and 128 voted in favour.

Adam Austen, a spokesman for Foreign Affairs Minister Chrystia Freeland, said the Canadian government is disappointed in the resolution presented to the emergency special session of the General Assembly, calling on the U.S. president to rescind his decision. The resolution declares that Jerusalem’s status can be changed only by direct Israeli-Palestinian negotiations.

“We are disappointed that this resolution is one sided and does not advance prospects for peace to which we aspire, which is why we will abstain on today’s vote,” Austen said in a statement emailed to Radio Canada International.

Canada is strongly committed to the goal of a comprehensive, just and lasting peace in the Middle East, including the creation of a Palestinian state living side-by-side in peace and security with Israel, Austen said.

“Canada’s longstanding position is that the status of Jerusalem can be resolved only as part of a general settlement of the Israeli-Palestinian dispute,” Austen said. “This has been the policy of consecutive governments, both Liberal and Conservative.”

The emergency discussion was held at the request of Turkey and Yemen, who turned to the General Assembly after an Egyptian draft resolution was presented to the Security Council and was vetoed by the United States, despite the support of 14 other member states.

Thursday’s vote was held in an atmosphere of heightened tensions and drama after President Trump threatened to retaliate against countries that support the resolution.