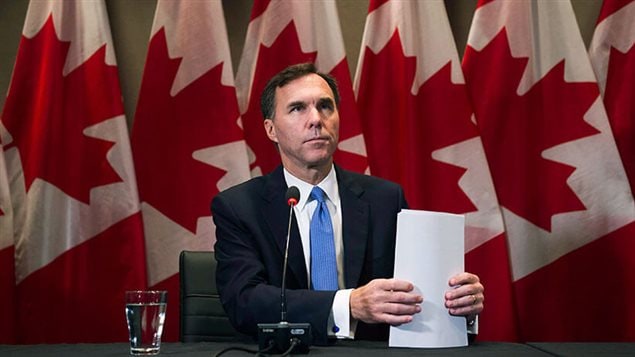 Finance Minister Bill Morneau faced a firestorm of criticism during the summer for his effort to revamp the tax code for small businesses in Canada. His own financial interests were put in the spotlight. These developments became the number one political story in Canada this year, according the CBC's program, Power & Politics.
Photo Credit: CBC

Political stories dominate the headlines in most media and 2017 featured some great tales.

While much of the global community was amazed at the developments in the United States with the new president, Donald Trump, we here in Canada had some interesting developments as well, in 2017.

Power & Politics, a CBC TV program, came up with its Top Five political stories of the year, and while some could argue the line-up, they were all major developments in Canada.

Professor Nelson Wiseman, of the University of Toronto’s Political Science department, would add to the list, to include the new leaders chosen for the two other major federal political parties in Canada.

Andrew Scheer is now the leader of the official opposition Conservative Party of Canada.

Scheer was first elected to parliament in 2004, at the age of 25, from the city of Regina, in the central province of Saskatchewan. Scheer went on to become the youngest Speaker of the House of Commons.

Jagmeet Singh, the first turban-wearing Sikh to lead a major political party, was chosen by the left-leaning New Democratic Party of Canada,

The 38 year-old criminal lawyer spent his childhood in St. John’s Newfoundland, while his father, from India, re-qualified as a psychiatrist in Canada. The family moved to Windsor, Ontario when Jagmeet was seven.

As for the Power & Politics list, here’s the countdown:

Number 5 – The Surge in Asylum Seekers

The thousands of asylum seekers, particularly those who tried to walk across the border, made for some dramatic footage this past year.

The most compelling images, Professor Wiseman recalls, were of the Somali refugees arriving in Canada in the dead of winter from the United States for fear of being deported.

During the summer, when the Trump administration declared it would be deporting the Haitian families who’d taken refuge in the United States following the earthquake in Haiti in 2010, many of them fled to Canadian border crossings, particularly French-speaking Quebec.

The ongoing process of acknowledging and healing the brutal legacy of violence and oppression of Canada’s First Nations in many aspects of Canadian society was a major and ongoing story during 2017.

An inquiry into missing and murdered indigenous women and girls (MMWIG) got off to a rocky start and has been challenged on several occasions, but the work continues. For decades, police forces in Canada ignored reports and requests from families to investigate what happened to their loved ones.

Professor Wiseman points out that many people in Canada, particularly in the large urban centres, may be completely unaware of this story and the recent developments.

Canada’s Truth and Reconciliation Commission Report was issues in 2015 and now there is on ongoing effort to implement its 94 Calls to Action.

Prime Minister Justin Trudeau campaigned on a promise to legalise marijuana during the federal election campaign in the summer of 2015. After winning the election he said July 1st, 2018 was the date, for legalisation, giving all the interested and associated groups time to get organised.

Despite ongoing complaints from some groups, such as police forces, that they won’t be ready, the timeline has not changed.

Professor Wiseman thinks this change in Canada will be an even bigger story in 2018. He says that the attitudes have been changing since the LeDain Commission  first recommended decrimini

The original goal was to have the renegotiated trade agreement between Canada, the United States and Mexico, all settled by this time, but the negotiations continue with the next session scheduled for Montreal.

The challenges have been in the demands the American negotiators are making and the impression that there isn’t much of a will to re-establish or update the agreement.

Professor Wiseman foresees an agreement in 2018 with a change in attitude and the opportunity to take credit for a new “improved” agreement.

The governing Liberal Party’s effort to reform the small business tax code turned into a major problem for the party and the Minister of Finance, Bill Morneau, who presented the plan.

There was a huge outcry and it put the minister under the microscope with questions raised about his own financial interests and pote conflicts of interest.