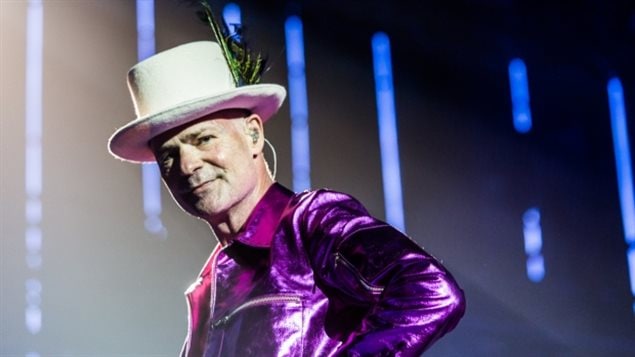 For the second year in a row, rock singer Gord Downie, the front man for the Kingston, Ontario-based band, the Tragically Hip, was named Canada’s Newsmaker of the Year–for reasons that remain extremely sad.

In May of 2016, Downie announced that he had an aggressive and incurable form of brain cancer, which he discovered after a seizure in December 2015.

Canadians were heartbroken by the news, but Downie and his band carried on, drawing mining love from audiences in Canada and the United States.

Last summer, the group embarked on a national “farewell tour” that gained wide media attention and staging a final concert on that was broadcast across the country.

In October, Downie, surrounded by his children and family, passed away at the age of 53,

But he left an extraordinary legacy, as Carmel Kilkenny tells us on this week’s edition of The LINK Online.

If Christmas is about tradition–among other things of course–a tradition that has endured at RCI for almost 10 years now is David Calderisi, one of Canada’s foremost actors, joining us to share a reading of Dylan Thomas’s great prose work “A Child’s Christmas in Wales.”

The piece is a romanticised version of Christmases past, of simpler times from the point of view of a young child. It has long enthralled both young and old. Once again this year, we shared Calderisi’s reading….on Boxing Day, as well as on this edition of The Link Online

Say one thing for the people in Canada’s animal rights movement–there’s no quit in any of them and they are scoring some hard-earned victories.

For one of the first years ever, there were no elephants in circuses in Canada and the province of Prince Edward Island banned circuses with wild animals and cancelled a pig scramble event after activists complained to authorities that chasing terrified baby pigs around a ring is illegal.

And Animal Justice Canada released an undercover expose of the Papanack Zoo in Ottawa, prompting calls for Ontario to license and regulate zoos.
So the activists battle on in the face of apathy by many and against what they see as entrenched industries that have a lot more money and clout to defend their interests.

Legal battles are joined, but the real trick, the activists believe, is to raise consciousness about the plight of too many animals.

Consciousness, they say, will lead to more and more compassion for animal victims–whether they be laboratory rats, hemmed-in salmon, mammals in aquariums, animals in zoos, chickens confined to tiny cages, farmed animals spending their final hours in misery and abused dogs and cats.

That consciousness and compassion, the activists believe, will lead to legislation, furthering activist causes.

In October, animal rights activists celebrated what they called a “huge victory” in the Senate when the upper chamber’s fisheries committee voted to move forward with Bill S-203, legislation that would ban keeping whales and dolphins in Canadian aquariums.

The decision came almost two years after the bill was introduced in the Senate and followed seven months of hearings by the fisheries committee and 30 years of confrontations between animal activists and Canadian aquariums, of which there are now just two–Ontario’s Marineland and British Columbia’s Vancouver Aquarium.

The bill, which was scheduled to go to the full Senate for a vote has been stalled by politics, but activists believe they will have the needed votes to pass the legislation when it does get to the Senate floor and then–if passed–moves to the House of Commons, where earlier this month, Conservative MP Michelle Rempel tabled a private member’s bill to amend the Criminal Code to close the loopholes in Canada’s laws when it comes to bestiality.

So for animal activists, the battle continues amidst growing optimism that–with the help of the Canadian public–they will prevail.

For some perspective and a look ahead, RCI spoke by phone with Anna Pippus at her home in Vancouver.

Pippus is an animal rights lawyer, strategist and activist who is Director of Farmed Animal Advocacy for Animal Justice Canada.