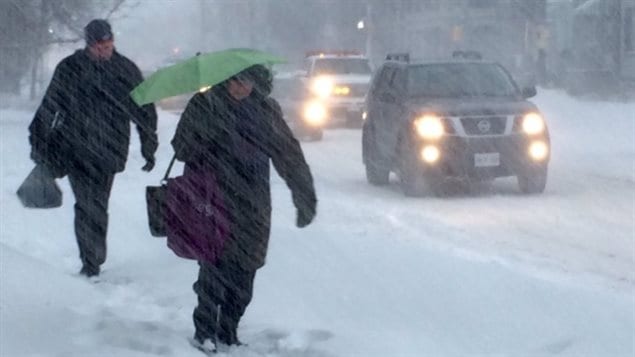 The New Brunswick Emergency Measures Organization is warning residents to have everything they need for at least 72 hours after the major storm coming Thursday.
Photo Credit: (CBC)

While the United States is bracing for a “bomb cyclone,” Environment Canada is warning of hazardous winter conditions in Eastern Canada as a major winter storm is expected to slam into New Brunswick on Thursday.

Environment Canada says the storm will approach the Maritimes from the southwest and will pass over southeastern New Brunswick Thursday night.

The weather system is also expected to bring strong northeasterly winds with gusts up to 90 km/h along coastal areas late Thursday afternoon or evening. The winds will shift Thursday night to strong northwesterly. These strong winds combined with rapidly accumulating snow will result in poor visibilities in blowing snow, Environment Canada warns.

Very strong northeast winds will produce elevated water levels which could lead to some minor coastal flooding along the south shore of the Bay of Chaleur and the Acadian coast around high tide Thursday night to early Friday, the agency says.

In the meantime, forecasters in the U.S. say a severe pressure drop will lead to an explosive winter storm along the eastern seaboard dubbed a “bomb cyclone,” which is already bringing snow to Florida.

The National Weather Service (NWS) has warned that “Arctic air mass will remain entrenched over the eastern two thirds of the country through the end of the week”.