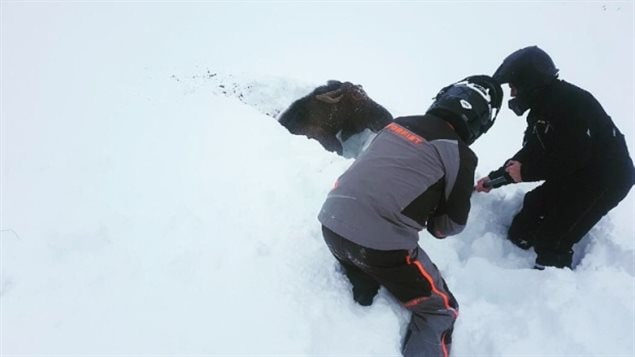 Snowmobilers got out their shovels and dug through the snow to free a moose stuck in a bog hole.
Photo Credit: Submitted to CBC by Jonathan Anstey

Moose are big, heavy animals and it’s not usually a good idea to mess with them, but last weekend a group of snowmobilers in eastern Canada worked to free one stuck in a bog hole and 1.8 metres of snow.

Approaching a moose is risky

Moose have long skinny legs and large hooves that usually make it easy for them to run in deep snow. But the deeper the snow the more difficult it is and that is to the advantage of wolves who hunt them.

Last Saturday, eight snowmobilers were riding trails near Deer Lake in the province of Newfoundland and Labrador when they saw some antlers sticking out of the snow. A closer look revealed a moose thrashing about and unable to free itself.

‘They can do quite some damage’

Jonathan Anstey knew moose can be dangerous and had to assess whether to take the risk and help. “You could tell he was frantically trying to get out of the hole,” he told CBC news. “It’s an up to 1,000-pound animal and they can do quite some damage. But considering his back legs were down in the mud hole we knew he couldn’t get out quickly and bust out to trample us.”

So, they took out shovels and cleared a path through the snow. Within a few minutes, the animal was freed, gave them a quick look and trotted off.  Anstey co-owns a snowmobiling riding clinic and he generally recommends people give moose a wide berth. Rather than try to rescue them, he advises people to call wildlife officials.

On Saturday, the group saw several moose having a hard time getting around in the deep snow that has fallen in the province. And things are likely to get worse. Officials today issued a snowfall warning as a powerful winter storm is expected to bring “rapidly accumulating snow” and blowing snow to the region.

The provincial government estimates there are about 110,000 moose on the island of Newfoundland, but hunters dispute that saying the figure is between 60,000 and 80,000. They have called for fewer hunting licenses to be issued.

There is a lucrative business in trophy hunting for moose in the province.

Video shows how effectively moose can usually run through snow