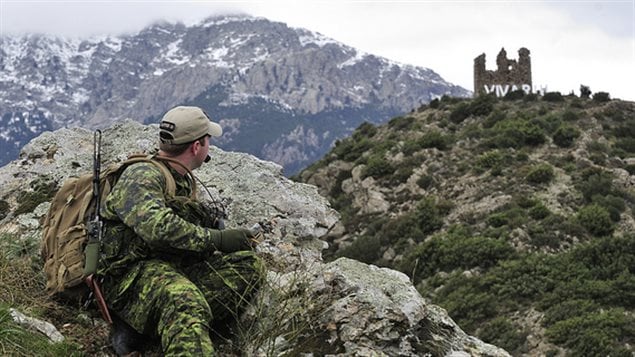 Capt. Andrew Jewer from CFB Valcartier sits at his station and observes other members of the Canadian joint terminal attack controllers during a training mission for SERPENTEX 2013 in Corsica, France on Dec. 2 2013.
Photo Credit: Master Seaman Steeve Picard

As part of Canada’s commitment to bolster Jordan’s ability to take on Islamic State militants in neighbouring Iraq and Syria, Canadian military personnel have trained Jordanian soldiers in the deadly art of calling in airstrikes and air support, defence officials revealed Tuesday.

“This training consisted of baseline instruction on how to coordinate air and aviation fires in support of ground forces.”

Over the last year and a half, Canadian soldiers have also delivered specialized training in logistics, material accountability and long-term maintenance planning to their colleagues in the Jordanian Armed Forces (JAF), Bouchard said in an email.

The Canadian Training Assistance Team (CTAT), consisting of small group of soldiers, arrived in Jordan in late August 2016, however, their identity, exact numbers, and location could not be disclosed due to operational security considerations, Bouchard said.

“Canadian Armed Forces (CAF) Build Partner Capacity (BPC) in Jordan includes enhancing the skills and capabilities of the Jordanian Armed Forces (JAF) by means of providing individual training to JAF soldiers, provision of personal non-lethal equipment such as individual clothing, as well as material and supplies that bolster the JAF ability to maintain security along their border with Syria,” Bouchard said.

“This project included the provision of training for some members of the JAF in order to improve their EOD skills in accordance with NATO standards,” Bouchard

The defensive stores project consisted of a donation of basic materials and supplies to be used by the Royal Jordanian Engineer Corps in the construction of defensive structures along a dedicated section of the Jordanian-Syrian border, one of the busiest crossings between the two countries, Bouchard said.