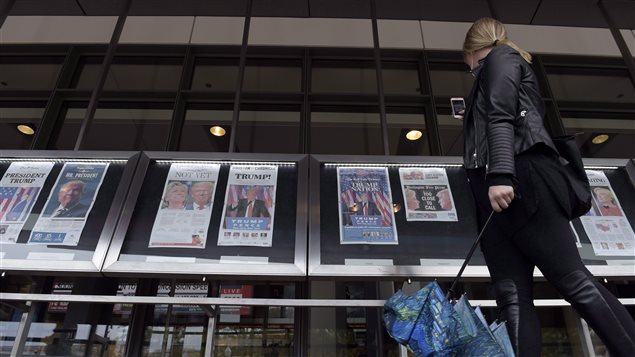 A woman views the front pages of newspapers on display outside the Newseum in Washington on November 9, 2016. Newsprint is the latest Canadian product to be hit with preliminary countervailing duties from the United States.
Photo Credit: PC / Susan Walsh

The federal government says it is “deeply disappointed” by the Trump administration’s decision to impose preliminary countervailing duties on Canadian newsprint, adding another trade irritant to relations between the two neighbours.

The U.S. Department of Commerce slapped on Tuesday an overall tariff of 6.53 per cent on about 25 Canadian plants, mostly in Quebec and Ontario, following an investigation that began in August 2017.

Canada is the largest exporter of newsprint in the world, with a market dominated by Resolute Forest Products, Kruger and Catalyst Paper Corp. of British Columbia.

Resolute faces a preliminary duty of 4.42 per cent while the Catalyst Paper duty is 6.09 per cent, Kruger’s is 9.93 per cent and the White Birch duty is 0.65 per cent.

The U.S. move will have the exact opposite effect, Foreign Affairs Minister Chrystia Freeland and Natural Resources Minister Jim Carr countered in a joint statement.

“We are deeply disappointed with the unjustified preliminary countervailing duty rates announced today by the U.S. Department of Commerce,” said the joint statement.

“Any duties will have a direct and negative impact on ‎U.S. newspapers, especially those in small cities and towns, ‎and result in job losses in the American printing sector‎.”

The U.S. Department of Commerce is expected to announce its final countervailing duties determination on May 22, 2018.

The U.S. government launched an investigation into Canada’s newsprint industry following a complaint by Washington-based North Pacific Paper Co. (NORPAC), alleging Canadian producers were dumping newsprint into the American market and were benefiting from unfair subsidies at home.

“NORPAC is an outlier, they are owned by a New York hedge fund and these aren’t people who are in the paper and forest product business, they’ve recently bought the mill and this is a clear attempt to make a quick buck and to line their own pockets with cash,” Kursman said in an interview with Radio Canada International.

“It’s motivated by their own narrow self-interest and it adversely affects hundreds of thousands of jobs. This is absolutely egregious, excessive and it’s the reason why they are all alone in seeking this kind of trade remedy.”

(click to listen to the interview with Seth Kursman)

Publishing, printing and newsprint industries in U.S. speak out

More than 1,100 small and medium size U.S. newspaper publishers, eight Senators and 34 Members of the House of Representatives have sent letters to Ross and U.S. Trade Representative Robert Lighthizer urging them not to impose anti-dumping and countervailing duties on Canadian newsprint.

The U.S. Department of Commerce says Canada exported about $1.6 billion worth of newsprint to the U.S. in 2016.

“There is no way for U.S. paper mills could meet demand for newsprint, no matter what price was charged for the Canadian product,” said an editorial by Buffalo News newspaper published on Dec. 29, 2017.

“But raising the price of newsprint significantly could be the death knell for many small publications and impose an unfair burden on the industry as a whole.”

Countering the newsprint duty would require newspapers to raise subscription and advertising prices, which would only accelerate the industry’s decline, or reduce staff and hobble newspapers’ ability to inform readers and keep an eye on government, the editorial said.

“This is what gives New York private equity guys a bad name,” Kursman said. “This is about short-term greed at the expense of hundreds of thousands of American jobs. It is absolutely disgusting behaviour.”

The new duties come as Canada and the U.S. continue to try to negotiate a trade settlement on softwood to replace the deal which expired in 2015.

The action was announced while Freeland was in Washington meeting with Ross and a number of influential U.S. legislators trying to drum up support for the troubled trilateral North American Free Trade Agreement between Canada, U.S. and Mexico, while the Trump administration entrenches its increasingly protectionist trade policy.

It also comes as Canada seeking relief from the softwood duties in appeals through the North American Free Trade Agreement and the World Trade Organization.