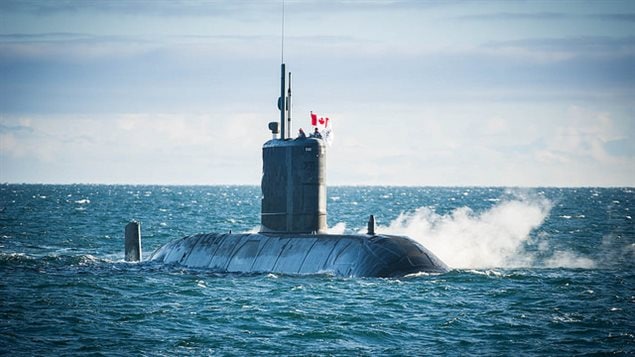 The Canadian military is likely to deploy one of its four submarines and up to two long range maritime patrol aircraft if asked to help the international community enforce United Nations sanctions against North Korea, says a Canadian military expert.

Canada’s top soldier Gen. Jonathan Vance said in an interview with the Globe and Mail on Friday that the Royal Canadian Navy has the capability to help enforce UN sanction against the regime in Pyongyang if such a request were ever made at Tuesday’s foreign ministers summit in Vancouver co-hosted by Ottawa and Washington.

Rob Huebert, an associate professor in the Department of Political Science at the University of Calgary and a senior research fellow with the Centre for Military and Strategic Studies, said he believes Gen. Vance, Chief of Defence Staff, is referring to HMCS Chicoutimi, a Victoria-class submarine that left its base in Esquimalt, British Columbia, sometime in mid-September for the Asia-Pacific region.

(click to listen to the interview with Rob Huebert)

The issue of naval interdiction will be high on the agenda of the summit of foreign affairs ministers from countries that sent troops to fight in the 1950-53 Korean War under the United Nations Command, as well as representatives from the Republic of Korea, Japan, India and Sweden, Brian Hook, Director of Policy Planning at the U.S. State Department, told reporters last week.

“We continue to explore all options to enhance maritime security and the ability to interdict maritime traffic, those transporting goods to and from the DPRK that support the nuclear and missile program,” Hood said, referring to the North by its official name, Democratic People’s Republic of Korea.

HMCS Chicoutimi would be a very useful asset for any international naval force deployed to interdict ships suspected of transporting embargoed goods to and from North Korea, Huebert said.

Any naval task force assigned to enforce the sanctions would need to be protected against the threat of North Korean submarines, which the regime in Pyongyang used successfully to sink a South Korean navy corvette killing 46 sailors in March of 2010, Huebert said.

“Submarine is a weapon of stealth,” Huebert said. “The best defence against a submarine is another submarine.”

‘Indication of resolve and strength’

If the foreign ministers meeting in Vancouver decide to really show the international community’s commitment to enforcing the UN sanctions, deploying submarines to protect the naval task force would also be an “indication of resolve and strength,” Huebert said.

“If you have a multi-force submarine force, what you’re saying back to the North Korean is, ‘If you escalate, we have the forces in theatre ready to respond,’” he said.

Canada could also offer to send one or two of its CP-140 Aurora long-range maritime patrol aircraft to be based either out of South Korea or Japan, Huebert said.

However, Canada would be limited in its ability to send surface vessels to the region because it doesn’t have and replenishment vessels to support the operation of its frigates that far from Canadian shores, Huebert said.

“We would have to be sailing them with the Americans to get any surface vessels over there,” Huebert said.

While both Russia and China have supported the recent UN Security Council sanctions against Pyongyang, the two countries, particularly China, worry that instead of making Pyongyang more compliant, tightening of the sanctions could drive the North Koreans over the edge.

Both China and Russia have slammed the meeting in Vancouver as counterproductive.

Both countries also want to limit U.S. and allied military presence in the region and the potential of having dozens of additional navy warships from various U.S.-allied nations trying to interdict North Korean vessels so close to the main Russian and Chinese ports in the Pacific is not an idea that either Moscow or Beijing cherish.

“As you may know, Russia and China have a joint initiative for transition from confrontation to a political settlement of the problem that emerged on the Korean Peninsula,” Lavrov was quoted by TASS. “For a start we suggest everybody should calm down and freeze any confrontational actions, in the first place, military activities, be it missile launches, nuclear weapons tests or large-scale exercises, which the United States has held and still holds in the region jointly with the Republic of Korea and Japan.”