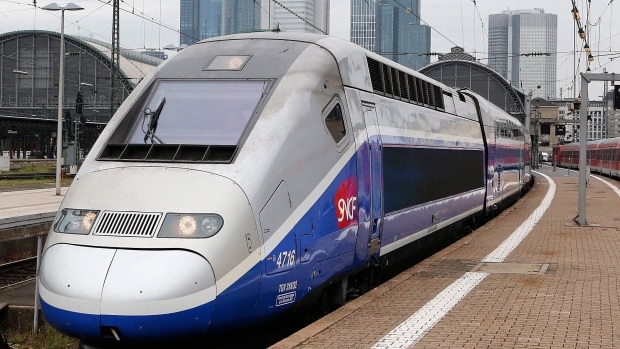 SNF train: High-speed trains like this one in France travel at 200 km/h or more. The Ontario provincial government says it will begin preliminary design work for a 350-kilometre rail line between Toronto and Windsor in Ontario. PHOTO: Associated Press

Canada is the only G7 country without a high-speed rail system, and this in spite of the fact that the huge distances between cities make it a worthwhile endeavour.

Ontario is now once again talking about a high-speed rail line with the appointment of former federal transportation minister David Collenette to chair a provincial advisory board on the concept. 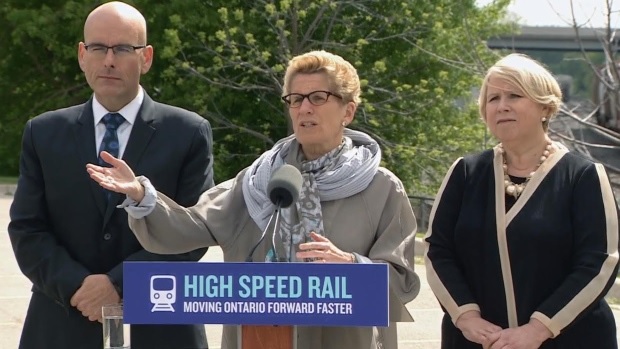 May, 2017: Ontario Premier Kathleen Wynne (at microphone)_ announces plans for a high-speed rail corridor between Toronto and Windsor. Phase one, which would see stops in Kitchener-Waterloo and London, would be completed by 2025 PHOTO: Radio-Canada

Politicians have been talking about high speed rail in the most populated region of Canada, from Quebec City to Windsor, for decades.

There was a “near” high-speed rail that operated in Canada between 1968 and 1982 between Toronto and Montreal, but it was sporadic. 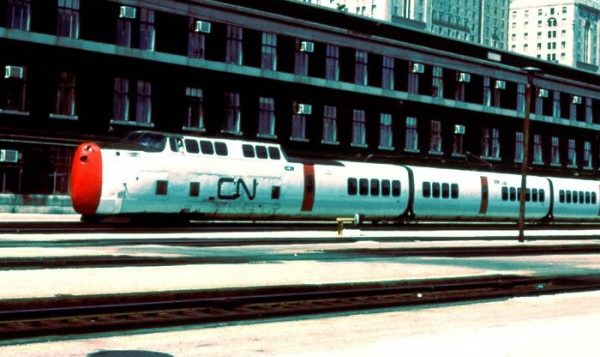 Indeed the inaugural run in December 1968 was marred when one of the two trains smashed through a meat transport truck at Kingston, about the halfway mark, fortunately with no major injuries.

There were no barriers at the level crossing and the driver had not noticed the wagging signals.

The trains also suffered from technical problems which kept them out of service for long periods of time, even years.

In 1979, one of the four trains caught fire and was written off, another was taken out of service to be used for parts for the remaining two which were replaced by diesels in 1982.

Hi speed rail has been talked about ever since with little concrete action.

Now the idea of high speed rail is back, but this time only in Ontario, and although an election promise by the Wynne government in 2014, it rated a mere three sentences in last month’s Ontario budget.

Advisory committee member Kathyrn McGarry said in a statement, ““High-speed rail will connect communities in our province as never before, creating new opportunities and increasing transportation choices for people across Southwestern Ontario”. 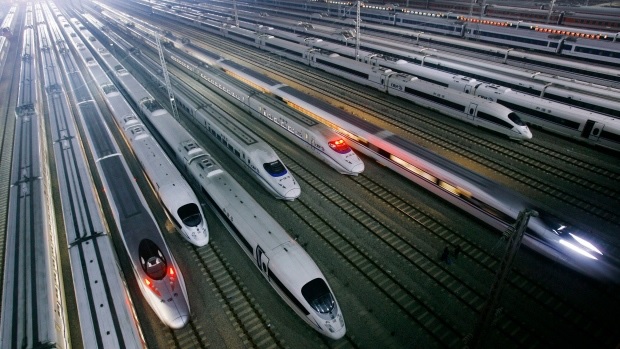 China’s CRH high-speed trains sit on tracks at a maintenance base in Wuhan, in central China’s Hubei province. Paradoxically, while many much smaller nations around the world have long had HSR, Canada with its vast distances is the only G7 country without. PHOTO: AP

Collenette, who will head the committee had already authored a report on the subject but which has been kept under wraps for months, only releasing it recently.

The high speed idea is estimated to cost $20 billion dollars and would travel on both existing track and some new track as it travels between Windsor and Toronto, with stops along the way at  Chatham, London, Kitchener-Waterloo, Guelph and Toronto Union Station, with a connection to Pearson Airport with trains running at up to 250km/h.

It’s a long term idea however with the Toronto London section only set to begin in 2025, with the London-Windsor route added in 2031.