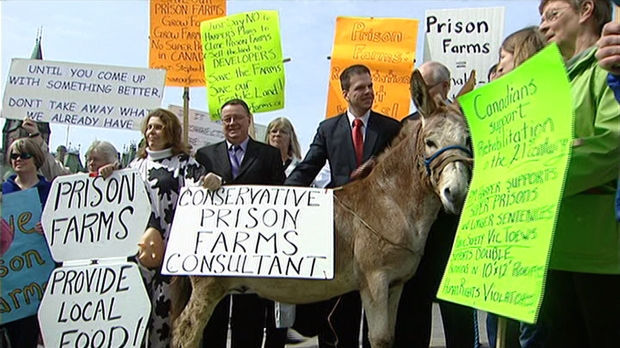 Many residents of Kingston, Ontario fought hard to get two prison farms in the area re-opened after the Conservative government closed them in 2010, the year these demonstrators went to Parliament Hill in Ottawa to protest the closings. Eight years later, they tasted victory. (CBC)

A lot of people in Kingston, Ontario got some very good news on Tuesday.

As part of its 2018 budget, the Liberal government announced it was going to re-open two prison farms in the area, committing $4.3 million over five years to the project.

The farms, to be run by a Correctional Service Canada rehabilitation agency, were closed by the Conservative government in 2010. 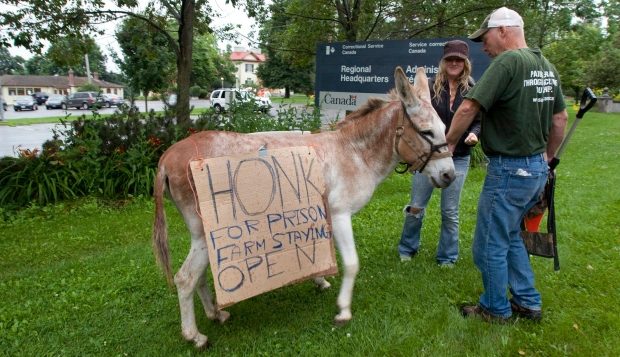 Jeff Peters and Olivia Groenewegen hold on to Stormy the donkey, the mascot of the movement to save Canada’s prison farms, during a protest outside Correctional Service Canada regional headquarters in Kingston, in July 2010. The federal government announced Tuesday that funding for two prison farms in Kingston will be reinstated. (Lars Hagberg/Canadian Press)

They were among a half-dozen prison farms across the country closed by the Tories, who believed they were not effective in rehabilitating inmates.

By the time they closed, the Kingston prison farms along with the four others–in New Brunswick, Manitoba, Alberta and Saskatchewan–employed dozens of inmates to collect milk and eggs, which were distributed to other prisons and local food banks.

The re-opening of the farms at Kingston’s Joyceville and Collins Bay institutions follows much lobbying, weekly demonstrations and fund-raising drives by residents, including many farmers, in the area,

What moved virtually all concerned was not financial gain but a deeply rooted understanding of the importance of rehabilitation.

I spoke by phone on Friday with Liberal MP Mark Gerretsen about those efforts and the final payoff, cemented in Tuesday’s budget.

With files from CBC, the Kingston Whig-Standard, the New York Times