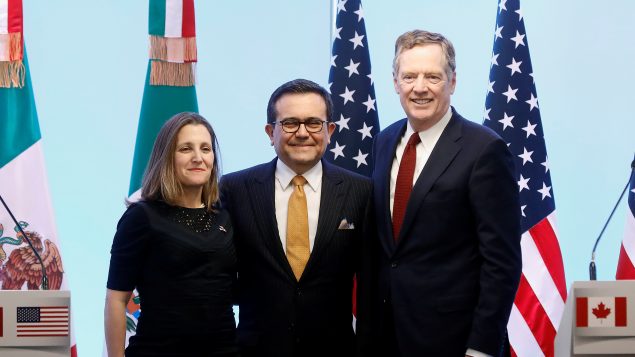 Ottawa would view any tariffs imposed by the Trump administration on Canadian steel or aluminum ‘as absolutely unacceptable’ and will take appropriate measures to defend its workers and industries if needed, Foreign Minister Chrystia Freeland reiterated on Monday.

“We will always stand up for Canadian workers and Canadian businesses,” Freeland said speaking at a joint press conference with her Mexican and U.S. counterparts at the end of the seventh round of NAFTA talks in Mexico City.

“Should restrictions be imposed on Canadian steel and aluminum products, Canada will take appropriate, responsive measures to defend our trade interests and our workers, and we will continue to stand up for steel and aluminum workers and industry.”

Standing up to Trump

Freeland’s forceful statement came following early morning tweets by U.S. President Donald Trump, saying he would only relieve Canada from the tariffs he has been threatening on steel and aluminum if a “new and fair” North American Free Trade Agreement is signed.

“We have large trade deficits with Mexico and Canada,” he tweeted Monday morning. “Tariffs on steel and aluminum will only come off if new [and] fair NAFTA agreement is signed.” 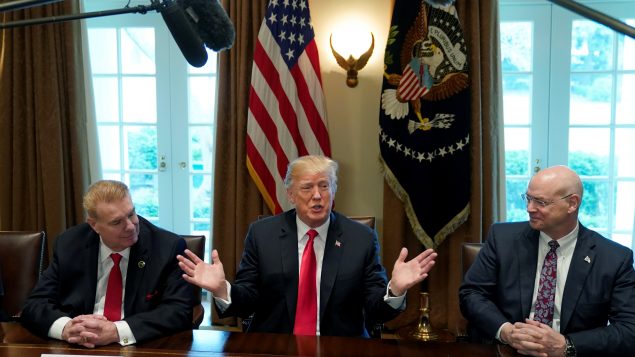 Chairman, CEO and President of Nucor John Ferriola and U.S. Steel CEO Dave Burritt flank U.S. President Donald Trump as he announces that the United States will impose tariffs of 25 percent on steel imports and 10 percent on imported aluminum during a meeting at the White House in Washington, U.S., March 1, 2018. (Kevin Lamarque/REUTERS)

He added: “Also Canada must treat our farmers much better. Highly restrictive. Mexico must do much more on stopping drugs from pouring into the U.S. They have not done what needs to be done. Millions of people addicted and dying.”

Last week, Trump announced hefty new tariffs for imports of steel, at 25 per cent, and 10 per cent for aluminum are on their way to boost U.S. manufacturers. 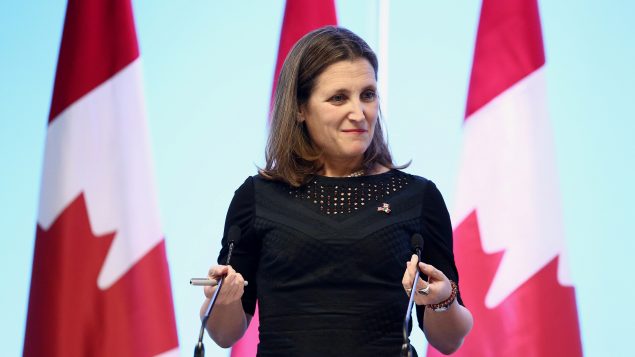 Canadian Foreign Minister Chrystia Freeland gestures during a joint news conference on the closing of the seventh round of NAFTA talks in Mexico City, Mexico March 5, 2018. (Edgard Garrido/REUTERS)

Describing itself as a key ally of the U.S. through the bilateral North American Aerospace Defence Command (NORAD) and NATO, Canada has been seeking an exemption.

Speaking to reporters after the joint statement with her Mexican and U.S. counterparts, Freeland said Canada opposes linking the NAFTA negotiations to the issue of tariffs, which are ostensibly being imposed on national security grounds under Section 232 of the Trade Expansion Act of 1962.

Speaking in French, Freeland told reporters she finds the idea that Canada is somehow a threat to U.S. national security unacceptable.

Meanwhile, Canada, Mexico and the U.S. made ‘solid progress’ on some of the ‘bread and butter’ issues and have closed six out of thirty chapters during the seventh round of renegotiation, Freeland said.

“We made progress in closing some important chapters and on the harder issues, very much following on the creative Canadian proposals, which we put forward in the Montreal round, we are having a real discussion and a real conversation on those more difficult issues,” Freeland said.

The Mexico City round of talks was the seventh since last August. Negotiators had hoped to wrap up their work with an eighth and final session in the U.S. by the end of March, but officials say they will not now meet that deadline.

In his remarks during the joint statement with Freeland and their Mexican host Economy Minister Ildefonso Guajardo, U.S. Trade Representative Robert Lighthizer noted that despite the hard work by the negotiators the parties have not made a lot of progress and are running against the clock.

The three countries have closed out only three additional chapters: good regulatory practices, administration and publication, and sanitary and phytosanitary measures, Lighthizer said.

They have also completed work on sectoral annexes related to chemicals and proprietary food formulas, and are making substantial progress on telecommunications and technical barriers to trade, as well agreeing to include a chapter on energy, Lighthizer said.

Running against the clock

On July 1, Mexico will choose a new president and campaigning begins next month. There are also upcoming provincial elections in Ontario and Quebec, and a midterm Congressional election in the U.S. in November, Lighthizer said.

“All of this complicates our work,” Lighthizer said. “I fear the longer we proceed, the more political headwinds we will feel.”

If a tripartite agreement proves impossible, Washington is ready to move ahead with separate bilateral agreements with Mexico City and Ottawa, Lighthizer said.

Freeland said she remains optimistic the negotiations will be concluded in time.

“It is very normal in trade negotiations for more chapters to be closed in each round as we move closer to the finish line,” Freeland said.

While significant work remains to be done on some of the harder and “fiendishly complex” chapters such as the rules of origin in the automotive industry, the parties are close to concluding several other chapters, she said.

“The arithmetic of six closed out of 30 doesn’t fully convey how far we are along on a number of chapters,” Freeland said.