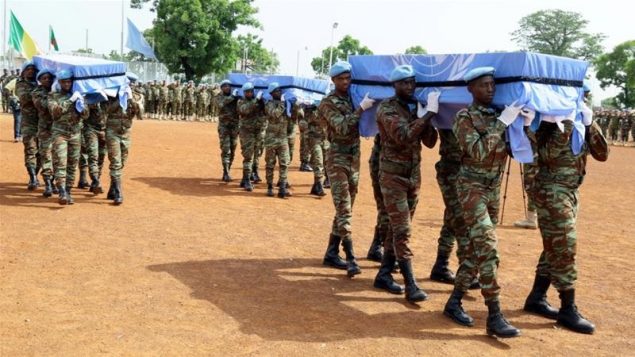 Peacekeepers carry four comrades killed on duty. The UN mission in Mali is one of the most dangerous peacekeeping operations in the world PHOTO:: Moustapha Diallo/Reuters

The large central African republic of Mali has been beset with bitter internal violence since Taureg uprising in the north in 2012.
This was followed by a military coup in 2013, and although an election was held later, infighting among a number of Islamist and other groups means the country is beset by unpredictable violence.

Canada has already poured over $1 billion in both military and foreign aid into the country but seemingly with little gain in stability.

The federal Liberal government had promised to increase Canada’s contribution to U.N peacekeeping, which has since sunk to its lowest level since the 1950’s with a mere 43 Canadians on peacekeeping duties as of the end of December. 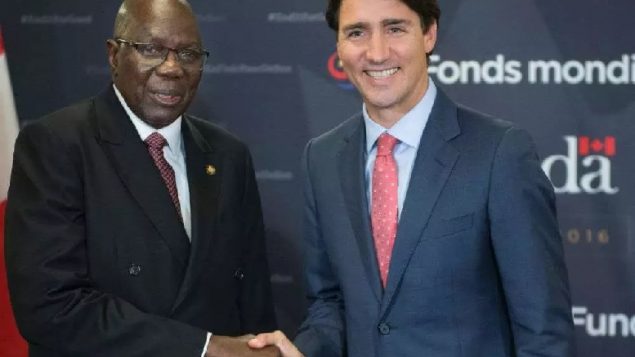 At least 160 peacekeepers killed
The mission in Mali, currently with about 11,000 members, is now seen as the most dangerous active U.N. peacekeeping mission with 163 peacekeepers killed since 2013, some through fighting, improvised explosives, and accidents such as helicopter crashes.
Seemingly under pressure from the U.N. to live up to its promise, the government will announce today that it it sending an aviation force to the country.
Conservative Party questions mission

In response to leaks the Liberal government will announce the mission this morning, Conservative Defence Critic James Bezan said, “Mali looks a lot like Afghanistan, so there is concern about how we are going to keep the peace when we have insurgencies, terrorism, failed states and multiple different missions going at the same time and no answers of how this is in Canada’s national interest”. 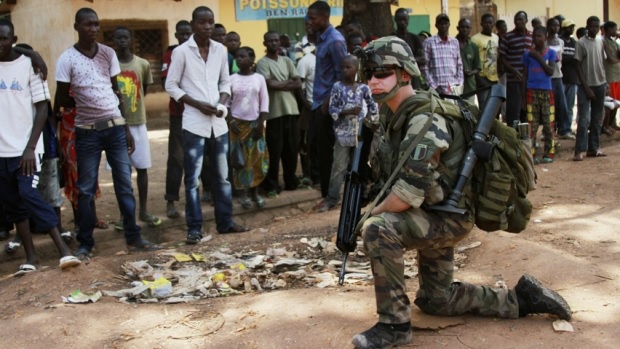 A French soldier crouches while on a foot patrol Bangui December 8, 2013. France had 1,600 troops operating in the country at one point. PHOTO : Reuters-Herve Serefi

The mission will likely involve up to eight aircraft including helicopters and two transport aircraft, with air crew and support personnel, as well as a 200-strong quick reaction force. The helicopter contingent will include Chinook helicopters for medical evacuations and various logistical transport support along with the smaller Griffons to act as armed escorts.

Canadian Prime Minister Trudeau also seems set to increase the number of female soldiers participating in the mission.
The base will likely be in the northern city of Gao, with the mission to become operational by August and last for some 12 months.