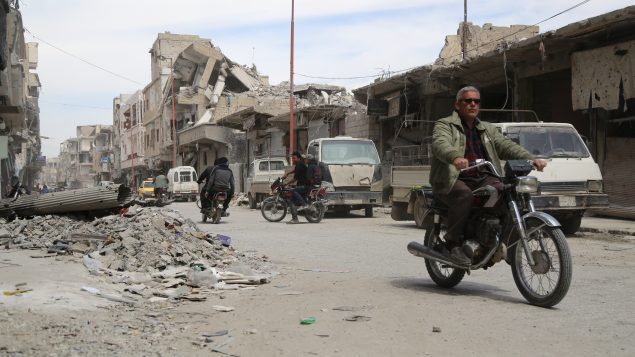 Most of Raqqa lies in ruins with most buildings nearly or partially destroyed while the entire infrastructure has become non-existent following the heavy fighting and aerial bombardment campaign to retake the de facto capital of the so-called Islamic State. (Marwa Awad/WFP)

Six months after Kurdish forces backed by U.S. air power and artillery recaptured Raqqa from Islamic State militants, the nearly destroyed former capital of the self-declared caliphate in Syria remains without the most basic services, according to a recent assessment by a team on UN experts.

A four-hour visit to the once-vibrant metropolis on the Euphrates River in northeastern Syria by a team of UN experts has provided a rare glimpse into the life in Raqqa as the city struggles to begin rebuilding after the five-months bloody siege and four years of ISIS rule.

A 25-member United Nations interagency team led by the World Food Programme (WFP) was allowed to visit the Raqqa on April 1, becoming the first UN team to visit the city since ISIS took control of it in 2013.

“We found the city, unfortunately, nearly completely destroyed,” said Marwa Awad, a Canadian, who works as the WFP spokesperson in Syria. “Almost all of it has been destroyed, the destruction is spread out across the northeast, south and west of the city.”

(click to listen to the full interview with Marwa Awad)

The city’s infrastructure has been completely destroyed, Awad said.

“There is no electricity, there is no water, people are buying water in tankers and the water is not clean according to the families we had a chance to speak to during our short assessment mission,” Awad said. “There is also no phone coverage.” 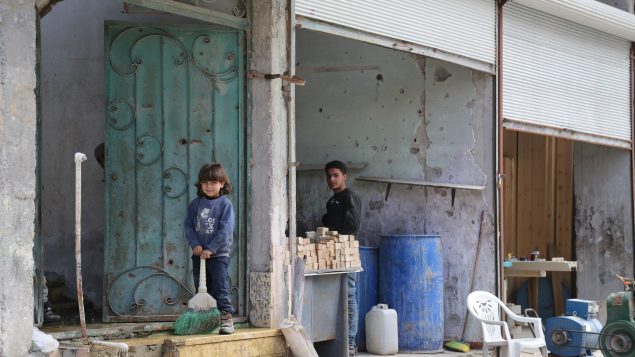 A 25-member UN team led by WFP visited Raqqa City on April 1, 2018, for the first time since 2013 to meet with the city council and locals to discuss humanitarian conditions and plan for delivering humanitarian assistance to the city’s returnees. So far, close to 100,000 people have returned to Raqqa and all require lifesaving and life-sustaining assistance, UN says. WFP plans to deliver food assistance to 30,000 people in the city. (Marwa Awad/WFP)

According to Airwars, a UK-based group of investigative journalists and volunteers that tracks the number of civilian casualties in Syria and Iraq, the U.S.-led coalition launched more than 20,000 munitions into the city during the five-month campaign to recapture it from ISIS.

In August of 2017, that barrage had officially increased to more than one bomb, missile, rocket or artillery round fired every eight minutes—a total of 5,775 munitions during the month, Airwars said in its report Raqqa: a city destroyed and then forgotten.

This was more than all munitions released by the U.S. in Afghanistan during all of 2017, Airwars said.

Airwars estimated that 2,000 civilians were killed during bitter fighting for control of Raqqa.

Hundreds more have been killed and maimed by mines and booby traps laid by ISIS fighters or by unexploded ordinance as nearly 100,000 civilians have returned to the city to try to rebuild their lives.

“There is a lot of discontent among the returnees because basic services are not there yet and it’s going to take a long time for the city to get back up on its feet again,” Awad said. 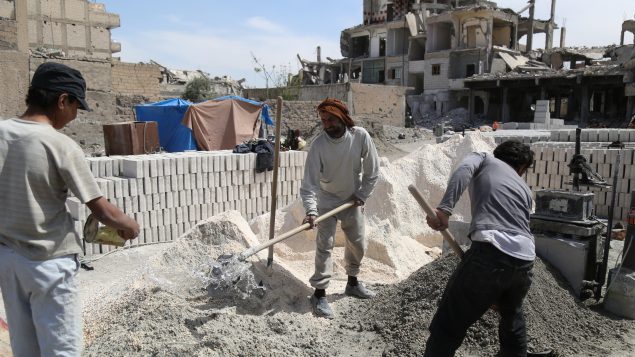 Most of Raqqa lies in ruins with most buildings nearly or partially destroyed while the entire infrastructure has become non-existent following the heavy fighting and aerial bombardment to retake the de facto capital of the so-called Islamic State. Residents told the UN interagency team that visited Raqqa on April 1 that their homes have either been destroyed or looted and complained of lack of clean water, electricity and phone coverage. Modest attempts of reconstruction are taking place across the city. (Marwa Awad/WFP)

The reconstruction of Raqqa will be a “colossal job,” she said.

“The destruction is not concentrated in a few neighbourhoods but it’s spread-out, which makes it more difficult than in other cities that we’ve seen, for example in Deir ez-Zor there was an area where you had a concentration of heavy fighting and destruction but you had two or three neighbourhoods that were more or less intact, and infrastructure in Deir ez-Zor was available and was existing even though it was bad,” Awad said. “But in Raqqa it’s even worse than that.”

On the other hand, food prices in the area that was once Syria’s breadbasket are comparable to other areas because trade routes from Damascus, Aleppo and Hassakeh bringing food from Iran and Turkey are now functioning, Awad said.

“However, unemployment is close to a 100 per cent, a lot of people don’t have jobs except maybe for traders who have access and are able to open up shop or fix the damaged infrastructure that belonged to them,” Awad said. “We’re looking at a situation where there are goods on the market but people can’t afford it and those who can afford it are very few compared to have-nots in the city.” 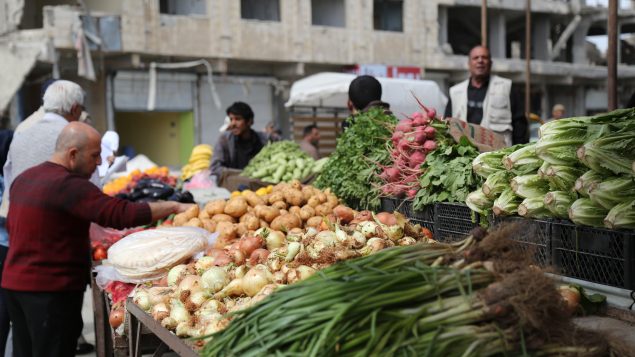 View of a makeshift market in Raqqa City. Most vendors have lost their shops and have resorted to setting up carts on the street to sell their goods. While the prices are similar to those in the rest of the country, the majority of Raqqa’s residents lack the purchasing power to buy goods in the market due to loss of assets and lack of basic services. (Marwa Awad/WFP)

More than half of the people the UN team talked to said they were buying on credit, she said.

“They are literally just borrowing or going to the market, saying, ‘I need x amount of eggs or x amount of produce and I’ll pay you back when I can,’” Awad said.

The WFP plans to truck in food assistance for 30,000 people every month to alleviate food insecurity in the region, she said.