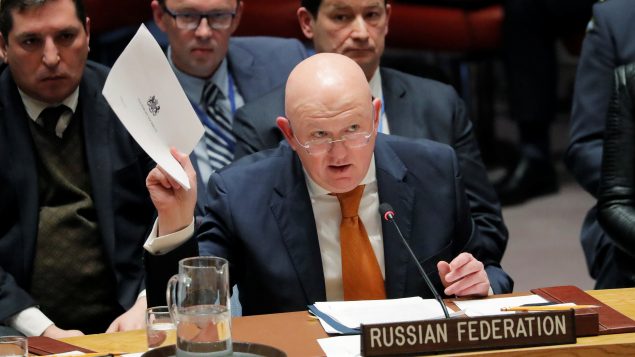 Russian Ambassador to the United Nations (U.N.) Vasily Nebenzya holds a copy of a British report on an incident in Salisbury, Britain, during a meeting of the U.N. Security Council at U.N. headquarters in New York, U.S., April 5, 2018. (Lucas Jackson/REUTERS)

Skripal affair exposes growing chasm between Russia and the West

Just when one thought that relations between Russia and the West could not get any worse, the poisoning of former Russian military intelligence officer, turned British spy, Sergei Skripal and his daughter Yulia in Salisbury  last month sent another Siberian chill through the already frigid atmosphere between them.

And finding an antidote for the poisoned relations between Russia and the West is becoming increasingly difficult, experts warn.

The Skripal affair has deepened the atmosphere of distrust that already existed between the Kremlin on one side and Britain and its Western allies, including Canada, on the other.

The speed with which British Foreign Secretary Boris Johnson pointed a finger at Russian President Vladimir Putin, saying he was “overwhelmingly likely” to have ordered the attack on Skripal as retribution for having betrayed dozens of Russian operatives to Britain’s Secret Intelligence Service (MI6) showed the depth of chasm between Downing Street and the Kremlin.

‘Spiral of rising tension and misperception’ 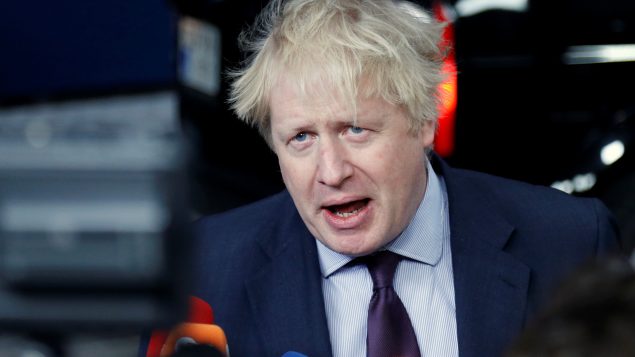 Johnson’s accusation came just days after British military scientists identified the poison used to attack the Skripals as a nerve agent from the “Novichok” family developed in the Soviet Union in the 1970s and 80s.

However, it later emerged that British scientists at Porton Down laboratory were unable to determine the country of origin of the nerve agent and the British Foreign Office subsequently deleted a tweet that said the nerve agent was “produced in Russia,” saying the remarks had been truncated.

Britain and its Western allies have expelled more than 120 Russian diplomats, saying they were Russian spies working under diplomatic cover. Russia has responded with own expulsions of Western diplomats it had identified as spies.

Russia told Britain at the United Nations Security Council on Thursday that “you’re playing with fire and you’ll be sorry.”

“We’re in a classic spiral of rising tension and misperception,” said Paul Robinson, professor of Public and International Affairs at the University of Ottawa and an expert on Russia. “Once you’re in such a spiral, it’s very-very hard to get out of it.”

Russia has vehemently denied all the accusations and has attempted, with some limited success, to poke holes in the British narrative, forcing British authorities on the defensive.

Russia has also pointed to the fact that both the United States and Britain have fabricated or misrepresented facts in the past to justify their intervention in Iraq, for example. 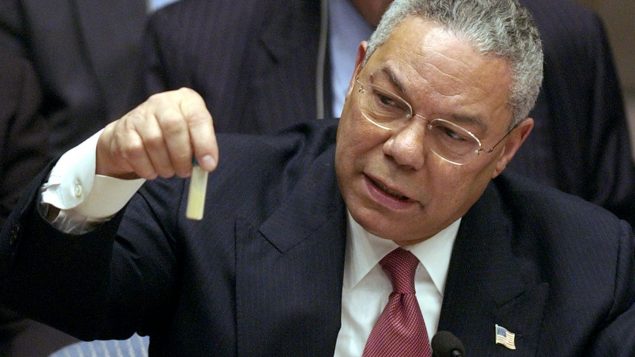 U.S. Secretary of State Colin Powell holds up a vial that he said could contain anthrax as he presents evidence of Iraq’s alleged weapons programs to the United Nations Security Council Wednesday, Feb. 5, 2003. Now weapons of mass destruction were ever found in Iraq following the U.S. invasion. (Elise Amendola/AP Photo)

“There is certainly a strong sense (in Russia) that this is a set-up job,” said Robinson, who is a former British military intelligence officer.

“Russians just don’t believe that they were involved because they just cannot see why their state would have done such a thing. And also they can’t actually see any firm evidence because no firm evidence has been produced.”

Therefore the Skripal case is strengthening the view among the Russian public that Russia is under attack from Western powers, Robinson said.

Robinson says having Russia as one the main suspects in this international mystery is quite reasonable.

“But there is a difference between considering someone to be a suspect and actually having certain evidence against them,” said Robinson.

Stephanie Carvin, assistant professor at the Norman Patterson School of International Affairs at Carleton University and a former national security analyst with the Government of Canada, said the British certitude of Russian culpability is based on more than just inconclusive lab results.

A pattern of behaviour? 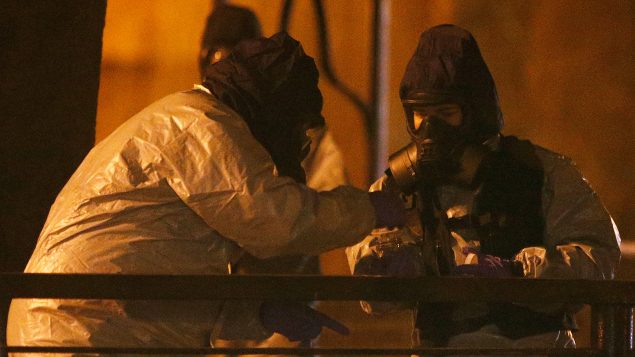 The poisoning of Sergei and Yulia Skripal also fits a pattern of Russian behaviour, including but not limited to the 2006 murder of former Russian spy Alexander Litvinenko, who was poisoned by radioactive polonium in his tea, Carvin said.

“There has been a series of deaths of Russians mysteriously in the UK for a number of years,” Carvin said. “They can say they are trying to repair relations (with the West) but the fact is that they have almost certainly been doing this for the past decade in the UK. They have never been really called out on it and now they are.”

When accusations are being made against the Russian state, one has to be careful on what grounds they are being made, Robinson said.

“The problem we have is evidence is rather lacking, all we’re actually being told is the identity of the agent supposedly used in this attack, but beyond that any connections to the Russian state is, as far as we’re able to tell, supposition,” Robinson said.

“In the absence of evidence it’s just based on assumptions, and assumptions can be wrong,” Robinson said.

It’s important to realize that what has been told so far in the Skripal case is not necessarily a hard fact but rests on certain assumptions, he said.

“And if you don’t share those assumptions, obviously you would doubt the entire narrative,” Robinson said.

Many of the people who doubt the official narrative being presented by Britain and its allies simply don’t see what benefit Russia would derive from targeting the Skripals, Robinson said.

UK confident in its case 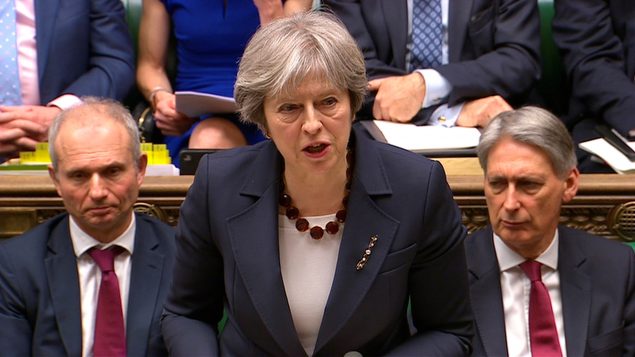 Britain’s Prime Minister Theresa May addresses the House of Commons on her government’s reaction to the poisoning of former Russian intelligence officer Sergei Skripal and his daughter Yulia in Salisbury, in London, March 14, 2018. (Parliament TV handout via REUTERS)

Most Russian pundits reject the idea that the Kremlin may have been behind the attack on Skripals by arguing that such action, as plainly demonstrated by the unified Western reaction to the poisoning, is clearly detrimental to Russian interests, Robinson said.

“Having said that, people can be stupid, states do stupid things so one can’t rule that out,” Robinson said.

Jez Littlewood, assistant professor in the Norman Patterson School of International Affairs at Carleton University in Ottawa, said the UK government is quite confident in its intelligence assessments of who the potential perpetrator was.

“Otherwise it would not go public and it certainly would have not invited and asked for assistance from the OPCW (the Organisation for the Prohibition of Chemical Weapons) in the Hague, which has taken samples and those samples will be assessed in separate designated laboratories,” Littlewood said.

Littlewood also dismissed any suggestions made by Russian officials pointing to the fact that the side that benefited the most from the Scripal affair politically is the government of Prime Minister Theresa May, insinuating that it was somehow involved in the poisoning.

“I don’t see that as any possibility and I don’t think that argument holds any credibility whatsoever,” Litllewood said. “This is Russia trying to deflect attention and throw ideas out there to confuse people or to muddy the waters or to distract attention.”