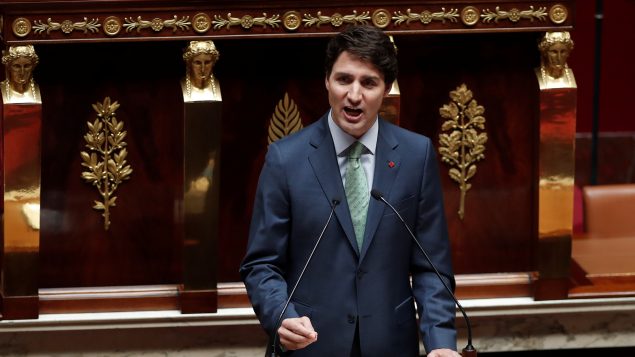 But while Trudeau received enthusiastic standing ovations for his remarks about climate change, the shared history between Canada and France during two world wars and Canada’s efforts to preserve and protect French culture, his defence of free trade and immigration was decidedly less popular.

With his trademark rhetorical flair Trudeau began his address by talking about the fear and anxiety gripping working people around the globe, pushing the disenfranchised further into the hands of populist and xenophobic movements that threaten Western liberal democratic values.

Trudeau warned about the dangers of growing inequality between the rich and the poor, stagnant wages and job insecurity and the ever-growing threat of climate change.

“Confronted with the great challenges of our time, liberal democracies bear the responsibility of articulating a clear and compelling vision of the future they aspire to, the world they hope to build,” Trudeau said in French.

Canada and France signed a new partnership Monday that they hope will add momentum to the Paris climate agreement.

“If there is one thing that France and Canada know, the fight against climate change must be conducted by the whole world because the consequences of global warming do not have any borders,” he said.