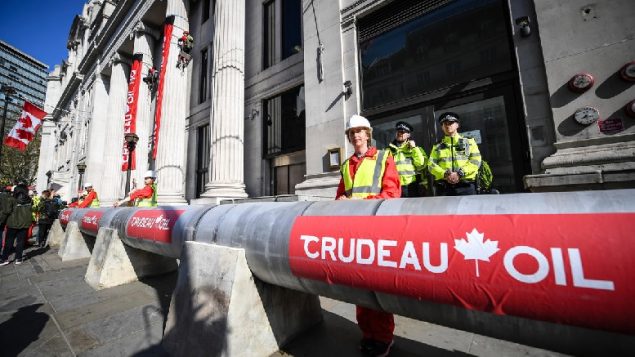 Wednesday 18 April, 2018. The entrance to the Canadian High Commission in Trafalgar Square. London has been blocked by climate campaigners who’ve built a huge oil pipeline around the building. The protest comes as Canadian PM Justin Trudeau is set to meet Commonwealth Heads of Government. The pipeline is branded ‘Crudeau Oil’., a play on the words "crude oil" and Prime Minister Trudeau's namel The blockade is a protest against the Trudeau government’s plans to build a huge oil pipeline from the Alberta tar sands across indigenous lands to ports in British Columbia. PHOTO- Greenpeace UK

Canada is embroiled in an increasingly bitter battle over an oil pipeline. The Trans Mountain pipeline would see the American headquartered company, Kinder Morgan, build a pipeline from the Alberta oil-sands across the Rocky Mountains, through British Columbia to the coast where it would be loaded on tankers destined for Asia. 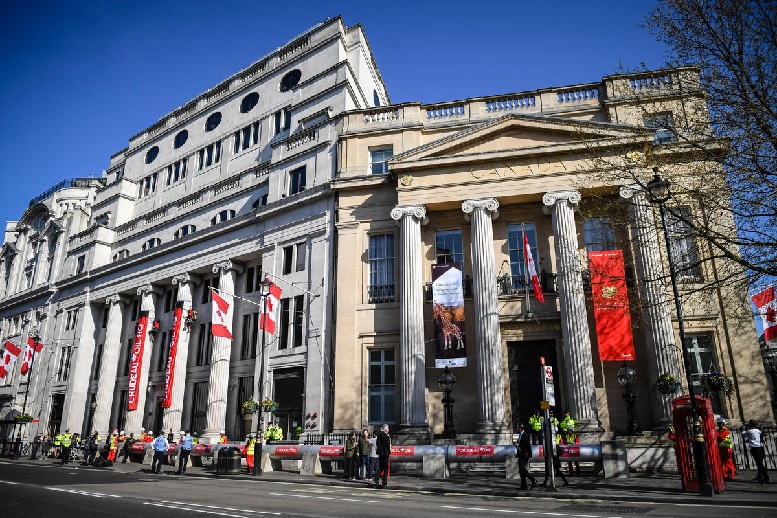 The model pipeline stretched across the front of the Canadian High Commission while officials and police stood by to ensure no incidents occurred. Photo- Greenpeace UK

Canada’s Prime Minister Trudeau who has recently vowed the pipeline will proceed saw the battle follow him to London today where activists erected a fake pipeline barrier around the Canadian High Commission where Trudeau was holding meetings.

The protesters climbed two of the large columns to unfurl banners  which mimicked signs on the model pipeline . 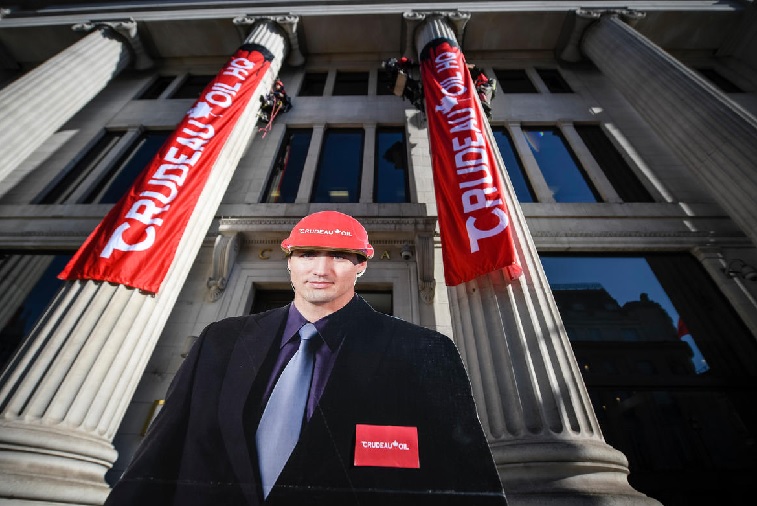 In addition to the pipeline, large banners were hung on two of the building’s columns along with a slightly larger than life cutout photo of the Prime Minister wearing a construction hat. Many Londoners seemed unaware of the pipeline debate raging furiously in Canada. Photo; Greenpeace UK

Trudeau was in the building but left quickly soon after. He will meet with the British PM and Her Majesty Queen Elizabeth before attending a Commonwealth leaders’ meeting on Thursday where he is expected to defend the environment.

Pat Venditti, head of Greenpeace UK said it was, “very hypocritical of the prime minister to be here in London talking about climate change while building a climate-wrecking pipeline that can only lead to more fossil fuels being burned”.

If completed, the new pipeline would greatly increase tanker traffic in the sensitive coastal area of British Columbia Photo- via Angus Reid

Meanwhile a new survey by the Angus Reid Institute shows an increasing majority (65%) of residents in B.C say the government should not block the pipeline.

When asked if a court rules that B.C does not have the constitutional authority to block the line, 69% of B.C residents say the provincial government should give in. 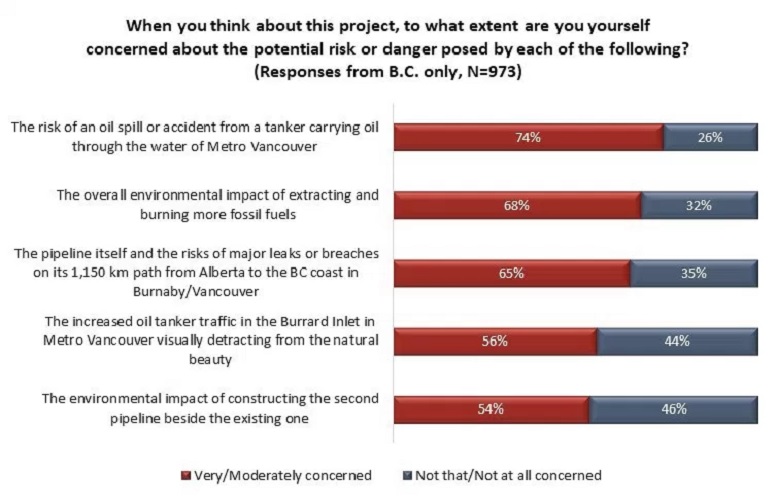 Even supporters of the pipeline expressed some concerns about the risks associated with its building and use Photo- Angus Reid Inst.

It has been suggested by both the Alberta and federal governments that public money might be used to invest in the pipeline to ensure its completion, but the majority of Canadians nationally (56%) think that’s a bad idea.

When asked about the risks, a clear majority (74%) said they feared an accident or spill from tankers, while other questions showed majority concern about other risks to the environment.