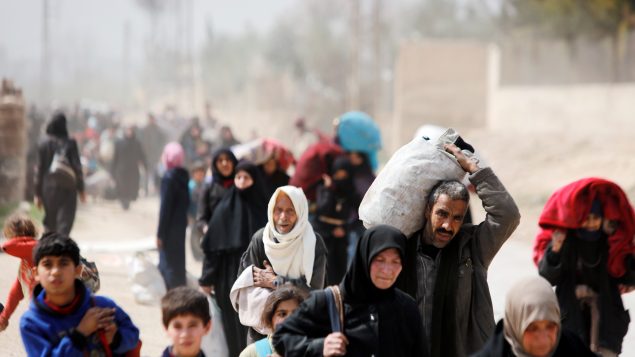 People walk with their belongings as they flee the rebel-held town of Hammouriyeh, in the village of Beit Sawa, eastern Ghouta, Syria March 15, 2018. (Omar Sanadiki/REUTERS)

The federal government announced Wednesday $19.5 million in funding to UN agencies and NGOs working to address humanitarian needs in Syria and Lebanon.

Canada’s contribution will help meet the basic needs of crisis-affected people in Syria and Lebanon, including through the provision of comprehensive health, water, sanitation, hygiene and protection services, Global Affairs Canada said in a press release.

The assistance, the lion’s share of which goes to the United Nations Population Fund (UNFPA), will also address the specific rights and needs of crisis-affected women and girls by providing specialized protection and reproductive health services, the statement said.

“Millions of people affected by the conflict in Syria still require urgent help, with many struggling to meet their basic needs,” Omar Alghabra, Parliamentary Secretary to the Minister of Foreign Affairs, said in a statement from Brussels, Belgium, during the second Conference on Supporting the Future of Syria and the Region.

“Today’s announcement of funding will provide much-needed relief to help meet the needs of those—too often women and children—most severely affected by this tragedy and help alleviate some of their suffering.” 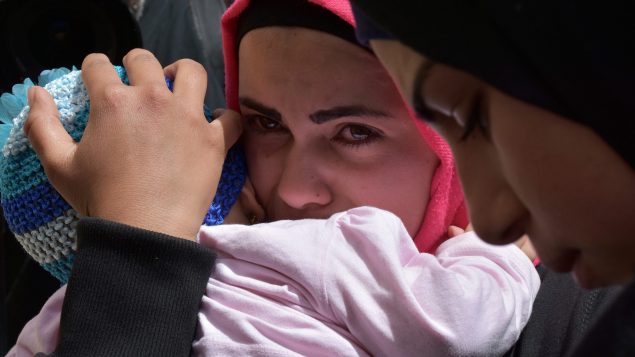 FILE – In this Wednesday, April, 18, 2018 file photo, displaced women who fled the Syrian war wait near the Lebanese-Syrian border as they prepare to return to their village of Beit Jinn in Syria, in Shebaa, southern Lebanon. (Ziad Choufi, File/AP Photo)

United Nations Population Fund (UNFPA) will receive $5 million in additional funding for an existing UNFPA project in Syria that provides sexual and reproductive health services to women and girls, and victims of gender-based violence.

About 13.1 million people inside Syria need immediate assistance, including more than four million women and girls of childbearing age, half a million of whom are pregnant, said Laura Londen, UNFPA’s Deputy Executive Director.

In addition, some 1.5 million women and girls live in areas with limited aid available, and about 359,000 have recently fled their homes to escape violence in Idlib, Eastern Ghouta and Afrin.

“Years of violence and widespread destruction across the country have caused profound upheaval and trauma for the affected women and girls,” Londen said in a statement.

“In addition to the conflict-related hardships they endure, these women are deprived of their basic right to sexual and reproductive health services.”

Ottawa is also providing $7 million in additional funding to four NGOs, who are not being named for security reasons. The money will go for the provision of comprehensive health services, including sexual and gender-based violence and sexual and reproductive health services; water, sanitation and hygiene services; and protection services.

The new funding helps to address key gaps in the humanitarian response stemming from the significant surge in internal displacement in recent months due to increased fighting in Eastern Ghouta and other regions of Syria. 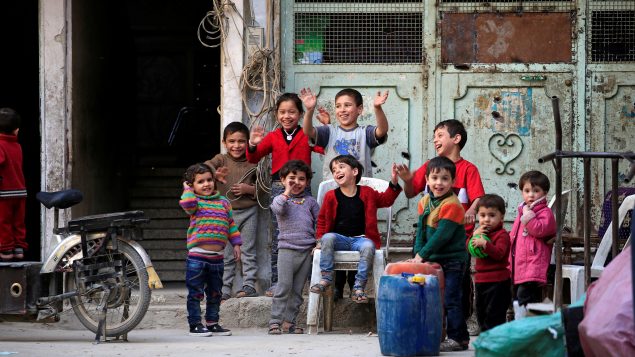 The United Nations Children’s Agency, UNICEF, in will also receive $2 million in additional funding in Lebanon for the provision of emergency water and sanitation services to vulnerable households, including refugees living in informal settlements, the government said.

“After more than seven years of conflict in Syria, it’s hard to see the light at the end of the tunnel,” said David Morley, president and CEO of UNICEF Canada.

“UNICEF is working every day to get children back into school, to provide them with the vaccinations they need and to protect them from violence. The reality is they are still under attack. Every day. In their homes, schools and even hospitals, they are being separated from family, injured or killed.”

The Canadian government has heard these desperate cries, Morley said.

“With this additional funding, UNICEF and its partners will be able to provide emergency water and sanitation services to the most affected children and their families, including those who have fled to Lebanon.”

International Organization for Migration (IOM) will receive $500,000 to for the implementation of an inter-agency humanitarian program to prevent and respond to sexual exploitation and abuse by aid workers.

The allocations announced on Wednesday are part of a funding envelope that was originally announced by Prime Minister Justin Trudeau in February of 2016 as part of Canada’s response to the crises in Iraq and Syria and their impact on Jordan and Lebanon.

Canada committed $1.6 billion over three years, of which $840 million was for humanitarian assistance.