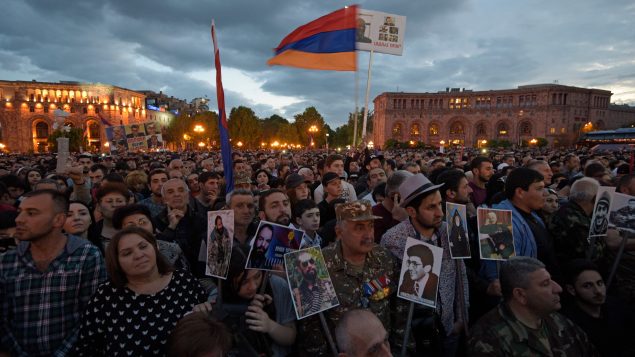 Armenian opposition supporters hold portraits and placards as they attend a rally in Yerevan on April 30, 2018. - Armenian opposition leader Nikol Pashinyan was engaged in high-stakes talks with the ruling party ahead of a key parliamentary vote, inching closer to taking power after two weeks of protests that transformed the country's political landscape. (Karen Minasyan/AFP/Getty Images)

Many Canadian Armenians are watching with baited breath as a non-violent grassroots protest movement in Armenia is about to complete the transfer of power from the governing party to the leader of the opposition whose unprecedented campaign of civil disobedience forced the resignation of the country’s prime minister and former president.

Armenia’s parliament is scheduled to vote for a new prime minister on Tuesday, eight days after former Prime Minister Serzh Sargsyan, who ruled Armenia for 10 years, stepped down following 11 days of mass and largely peaceful protests against his continued rule in the former Soviet republic. 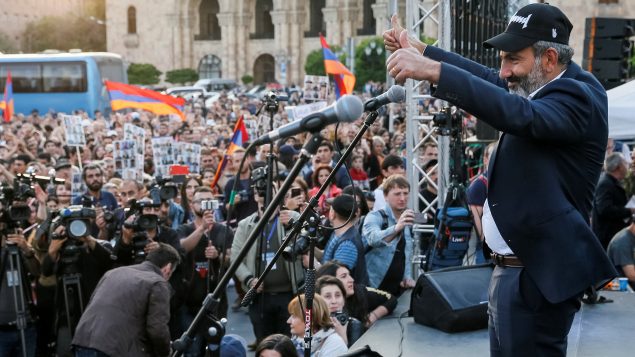 Nikol Pashinyan, the leader of the opposition Yelq (Exit) movement who has accused Sargsyan and his ruling Republican Party of mass election fraud and vote buying, is demanding that the Republican-controlled parliament elect him as interim prime minister so he can organize free and fair elections in Armenia.

Protests in support of Pashinyan have been held all across Armenia and Armenian Diaspora communities scattered around the world, including a protest on Sunday in front of the Armenian embassy in Canada.

Vadz Ghazaryan, an IT professional who immigrated to Canada from Armenia in 2014, said the protests have transformed the political landscape in his homeland, giving people hope that the corrupt political system led by the Republican Party can finally be reformed.

(click to listen to the interview with Vadz Ghazaryan)