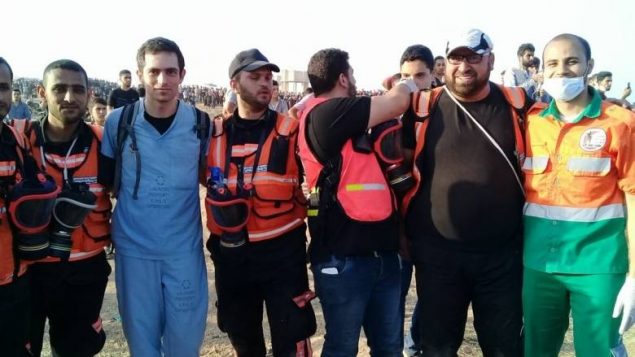 A Canadian physician says he was shot in the leg by Israeli snipers near the border with the Gaza Strip on Monday despite wearing “clearly identifiable medical garb.”

In a blog posted on Monday, Dr. Tarek Loubani, who works at the London Health Sciences Centre, said he was shot as he was standing with a group of paramedics about 25 metres away from the protest area, wearing “hospital green top and bottom so I could both be identified as medical staff and a physician.”

“We were standing well away from the main protest area,” Loubani wrote. “The snipers in the three sniper outposts all had clear views of us.”

There was no active shooting from the Israeli snipers immediately before or after and there were no protesters in the immediate vicinity, Loubani said.

“I heard a loud bang and found myself on the ground,” Loubani said. “The bullet had entered my left proximal calf on the lateral side, exited on the medial side (moderate) and pierced my right knee superficial to the patella (minor). I yelled fuck.” 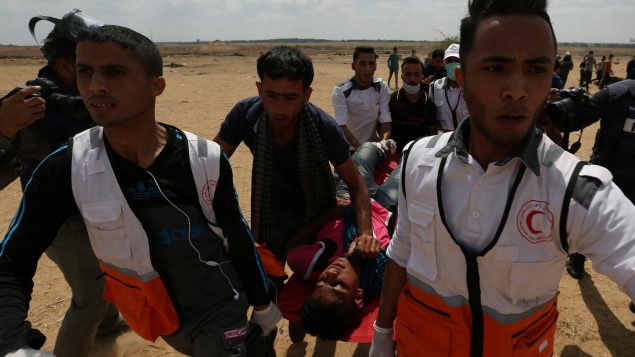 A wounded Palestinian is evacuated during a protest against U.S. embassy move to Jerusalem and ahead of the 70th anniversary of Nakba, at the Israel-Gaza border in the southern Gaza Strip May 14, 2018. (Ibraheem Abu Mustafa/REUTERS)

Loubani said he believes he was shot with “a regular bullet and not the exploding bullets that are causing severe injuries reported today and on other days.”

Paramedics treated him at the scene before he was transported to hospital, where he was stabilized and discharged after X-rays showed he had no bone injury, Loubani wrote.

About an hour later, one of those paramedics, Musa Abuhassanin, was shot and killed while attempting to rescue another person, Loubani said.

Abuhassanin, like most Palestinian paramedics, was wearing a fluorescent high visibility jacket when he was shot in the thorax, Loubani said.

“He had a great laugh and was a good paramedic,” Loubani said.

A total of 19 Palestinian medical professionals were shot Monday, he said. 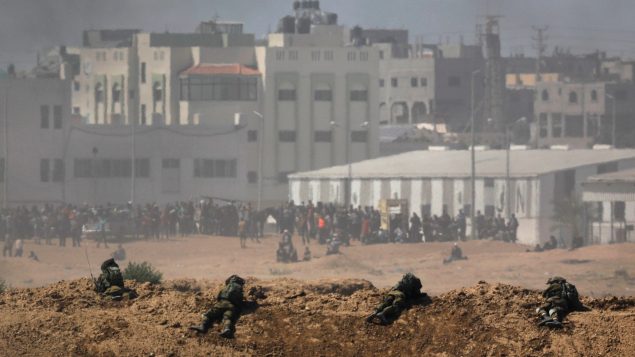 Smoke rises as Israeli soldiers are seen on the Israeli side of the border with the Gaza Strip, Israel, May 14, 2018. (Amir Cohen/REUTERS)

In response to the news of Loubani’s injury, the Montreal-based non-profit group Canadians for Justice and Peace in the Middle East (CJPME) released a statement calling on the Canadian government to condemn the violence in Gaza.

Medical personnel exclusively assigned to medical duties must be respected and protected in all circumstances, according to Geneva Conventions.

They lose their protection only “if they commit, outside their humanitarian function, acts harmful to the enemy.”

“Parliamentary Secretary Omar Alghabra as well as consular officials have been in touch with his family earlier today,” Austen said in an email statement to Radio Canada International. “Canada is very deeply saddened and deplores the violence that has occurred in the Gaza Strip. It is appalling and inexcusable that civilians, members of the media, first responders, and children have been among the victims.”