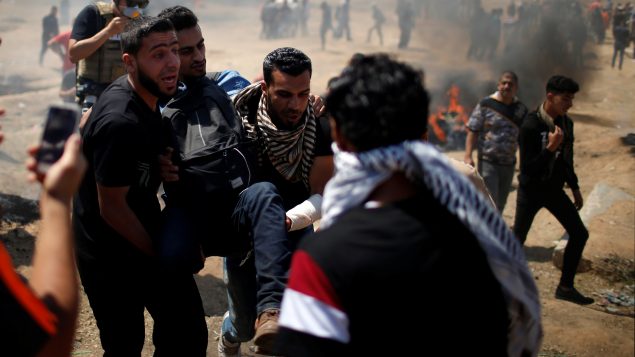 A wounded Palestinian is evacuated during a protest against U.S. embassy move to Jerusalem and ahead of the 70th anniversary of Nakba, at the Israel-Gaza border east of Gaza City May 14, 2018. (Mohammed Salem/REUTERS)

Canada is “deeply concerned” by the violence in the Gaza Strip, Foreign Affairs Minister Chrystia Freeland tweeted Monday after Israeli troops shot dead dozens of Palestinian protesters on the border with Israel.

In the bloodiest single day for Palestinians since 2014, Palestinian Health Ministry officials said 58 protesters were killed and 2,700 injured by live gunfire, tear gas or other means.

At least five of the fatalities were children with the number of child casualties in Gaza since the protests began more than six weeks ago now surpassing 1,000, humanitarian group Save the Children reported.

Monday’s bloodshed drew calls for restraint from some countries, including France and Britain, and stronger criticism from others, with regional power Turkey calling it “a massacre”.

“We are saddened by deaths and injuries that occurred today and over past weeks,” Freeland tweeted. “It is inexcusable that civilians, journalists and children have been victims.”

All parties to the conflict have a responsibility to ensure civilians are protected, Freeland added, drawing a furious backlash from dozens of people who criticized the Liberal government for not calling on Israel to end its use of deadly force against Palestinian protesters.

Deeply concerned by violence in Gaza Strip. We are saddened by deaths + injuries that occurred today + over past weeks. It is inexcusable that civilians, journalists + children have been victims. All parties to the conflict have a responsibility to ensure civilians are protected.

“In statements about #Palestinian victims in #Gaza/#WestBank why don’t you ever condemn Israel for brutality / use of lethal force against people who are protesting?” tweeted one user.

“Minister Freeland – your use of the passive voice to describe the deaths in Gaza is chilling and misleading. Gazan civilians were shot and killed by Israeli fire,” added another.

“Oh, come on, Canada has to condemn Israel for this massacre, this flagrant abuse of human rights. These are Palestinian men, women & children killed by Israeli military. Stop glossing over the facts. Canada can’t be for human rights in one country & not in the other,” chimed in another critic. 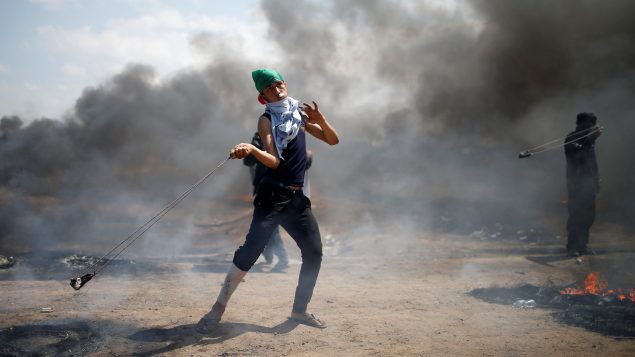 A Palestinian demonstrator uses a sling to hurl stones at Israeli troops during a protest against U.S. embassy move to Jerusalem and ahead of the 70th anniversary of Nakba, at the Israel-Gaza border east of Gaza City May 14, 2018. (Mohammed Salem/REUTERS)

The Israeli military said in a statement: “Rioters hurled firebombs and explosive devices at the security fence and Israeli troops”. The soldiers’ response, it said, was in accordance with “standard operating procedures”.

“Every country has an obligation to defend its borders,” he wrote on Twitter. “The Hamas terrorist organization declares it intends to destroy Israel and sends thousands to breach the border fence in order to achieve this goal. We will continue to act with determination to protect our sovereignty and citizens.”

A senior Hamas leader, Khalil Al-Hayya, said at a border encampment that Monday’s protest was timed to coincide with the “deplorable crime of moving the U.S. Embassy to Jerusalem”. 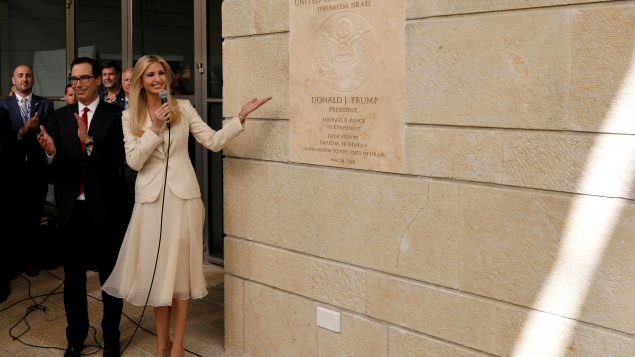 The timing of events was deeply symbolic to Israel and the Palestinians.

The U.S. said it chose the date officially move its embassy to coincide with the 70th anniversary of Israel’s establishment.

But Tuesday also marks the anniversary of what Palestinians call their “nakba,” or catastrophe, a reference to the uprooting of hundreds of thousands who fled or were expelled during the 1948 war surrounding Israel’s creation. A day of mourning and mass funerals was planned Tuesday.

A majority of Gaza’s 2 million people are descendants of refugees, and the protests have been billed as the “Great March of Return” to long-lost homes in what is now Israel. 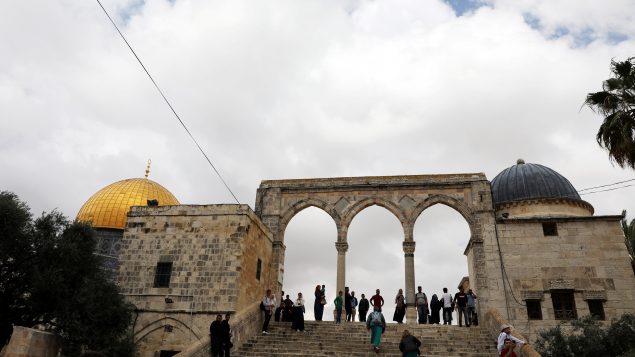 A general view of the compound known to Muslims as al-Haram al-Sharif and to Jews as Temple Mount, in Jerusalem’s Old City, May 13, 2018. (Ammar Awad/REUTERS)

Palestinians seek East Jerusalem as the capital of a state they hope to establish in the occupied West Bank and the Gaza Strip.

Israel regards all of the city, including the eastern sector it captured in the 1967 Middle East war and annexed in a move that is not recognized internationally, as its “eternal and indivisible capital”.

Most countries say the status of Jerusalem – a sacred city to Jews, Muslims and Christians – should be determined in a final peace settlement and that moving their embassies now would prejudge any such deal.

Ottawa too has no intention of following Washington’s example in officially recognizing Jerusalem as the capital of Israel and moving the Canadian embassy there from Tel Aviv, Freeland said in December 2017.

‘‘Canada is a steadfast ally and friend of Israel and friend to the Palestinian people,” Freeland said in a statement, following President Trump’s decision last year to reverse decades of U.S. policy and recognize Jerusalem as the capital of Israel.

“Canada’s longstanding position is that the status of Jerusalem can be resolved only as part of a general settlement of the Palestinian-Israeli dispute.”

Canada is committed the goal of a “comprehensive, just and lasting peace in the Middle East, including the creation of a Palestinian state living side-by-side in peace and security with Israel,” Freeland said at the time.

Peace talks aimed at finding a two-state solution to the conflict have been frozen since 2014.