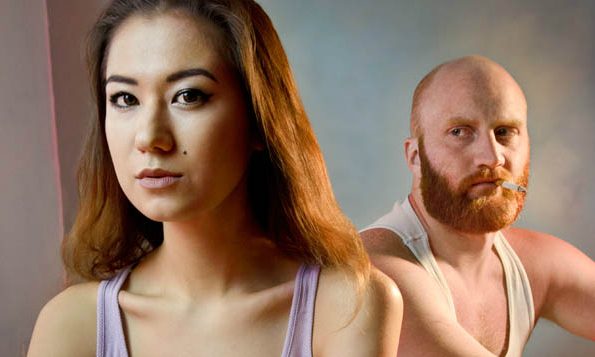 But Barlizo says she wants to help bust that myth with her new play that features an unlikely duo of main characters: Nina, a young Filipina girl driven to hatch up a plan to murder her own parents because of the unbearable pressure to succeed, and Sylvain, a former skinhead haunted by his violent past and seeking redemption.

“What I’m writing about in my play, LUCKY, is about the harmful stereotype of the model minority for Asians,” Barlizo said. “Model minority is basically saying that Asians are better than other immigrants in the sense that we’re more successful, we do better, we’re obedient, we’re submissive.”

The play, which premieres at Montreal’s 2018 St-Ambroise Fringe Festival, is loosely inspired by the story of Jennifer Pan, a Vietnamese Chinese student-turned-murderer who, after failing to graduate from high school in Toronto, deceived her parents into thinking she was a model student by forging report cards and eventually, hired hitmen to have them killed, Barlizo said. 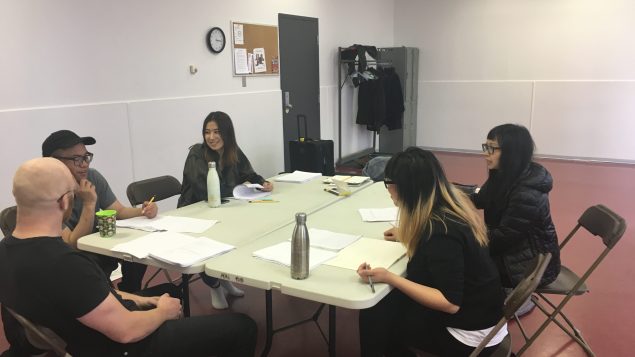 (From left to right) Christian Jadah, Jeremy Cabrera, Katharine King, Marie Barlizo and Sophie Gee “workshopping” the play Lucky by Marie Barlizo at the MAI, which will be produced at the Montreal’s 2018 St-Ambroise Fringe Festival. (Photo by Emlyn van Bruinswaardt)

Having been born in the Philippines and brought up in Montreal, Barlizo said she felt an immediate connection to Pan when she read her story in the Toronto Life magazine.

“I was my parents’ golden child and they pushed me to a certain level and at a certain point in my life I was crushed under those expectations,” said Barlizo, who was the first visible minority graduate of the National Theatre School’s Playwriting Program and holds a Master of Fine Arts degree in Creative Writing from UBC. “I didn’t know how to handle it when I actually failed.”

The play’s director Sophie Gee, said her first reaction to the play when Barlizo described it to her was a feeling of surprise and fascination with the unusual pairing of the two main protagonists, played by Christian Jadah and Katharine King.

“What is fascinating about the play and continues to fascinate me as we dig into it in our rehearsal process is how there are so many similarities between these two characters, who you would think have nothing to say to each other, nothing in common at all,” Gee said.

“At first when you see Nina, you’re kind of worried for her and then you see how much power she actually has, but that she has been boxed into this idea,” Gee said. “And when we as the audience come in, we have an idea of what a small, little Asian woman is like too, and we think, ‘Oh, she’s harmless.’ But there is more to her than that.”

But while for Nina’s character Barlizo and Gee could draw on their own experiences of growing up in Asian immigrant families in Canada, they had to turn to outside help for Sylvain’s character, a former skinhead who now drives subway trains and is suffering from PTSD after hitting a woman who jumped in front of his train.

Barlizo said for authenticity she consulted Christian Picciolini, a former skinhead who now advocates for peace through his organization Life After Hate and is the author of “Romantic Violence: Memoirs of an American Skinhead.”

“We’ve talked through these things and everybody has been able to share what their comfort level is in doing this but we know that the script calls for the actors to go certain places sexually and also there is a level of violence in the play too,” Gee said.

“For me why I’m doing it is to break the taboo of Asian women being submissive and obedient,” Barlizo said. “I wanted to create a character who is a strong character, a strong Asian woman, but who is also at the mercy of being oppressed by the Asian stereotype of a woman.”