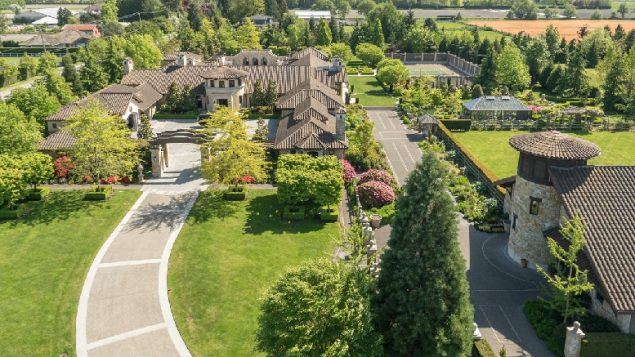 This mega-house complex was built on a 20 acre section of farmland in Richmond. It was recently listed for sale at $26 million, and was sold. Photo: Engels and Volker- J MacDougall

Battle over monster homes on farmland in British Columbia

The loss of farmland in Canada is an ongoing concern as urban sprawl and speculation eats up more and more of this critical resource.

In the city of Richmond, British Columbia, the battle has been over enormous “monster” houses being built on farmland.

Although Canada is huge, one group, Canadians for a Sustainable Society, put suitable cropland at only 3.2 percent of the land mass, and pasture land at 4.2 per cent. According to the World Bank, arable land in Canada in 2015 was a mere 4.7 per cent.

Richmond was once a vast rich farming area, but its proximity to booming Vancouver has meant urban expansion, What has becoming worrisome to many is that has now spread to land reserved for agriculture, known as Agricultural Land Reserve (ALR).

People have been buying up plots of farmland and building enormous houses on it.  In some cases, buying farmland becomes very attractive as there are significant tax breaks although no farming is being done.

Not only are there concerns about how the loss of farmland will effect food production, but also how these practices are pushing the value of the land beyond the reach of future farmers.

In a press release today, the B.C Green Party is calling on the provincial government to take more drastic action to save farmland.

Adam Olsen, MLA for Saanich North and the Islands said  “This decision at Richmond Council will drive the price of ALR in their community sky high, it will impact the rest of the province and demonstrates the need for action at the provincial level. ….The issue of speculation driving up land prices is well-documented and its solutions are clear. Delaying action only causes the issue to spiral further out of control: Last year, Richmond alone lost 50 farms due to the construction of mega-mansions on farmland. I urge the Minister in the strongest terms to recognise and take immediate action before any more farmland is lost.”

Although Richmond council voted not to impose further restrictions on “monster” homes on farm lots, it is highly likely the controversy and battle will continue, not only in Richmond, but elsewhere across Canada, involving issues of both the loss of valuable farmlands, and mega houses.