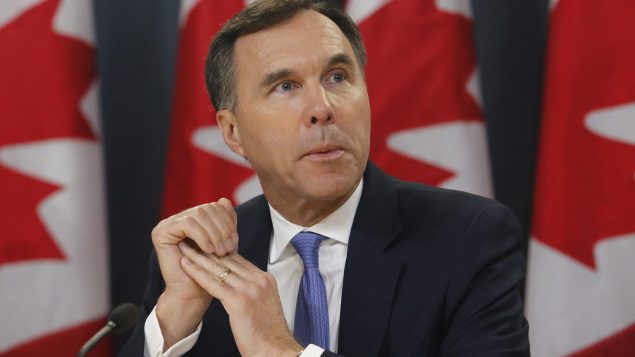 The federal government is willing to back financially Kinder Morgan or any other company that steps in to build the controversial Trans Mountain pipeline expansion project to transport crude from Alberta’s oilsands to the coast of British Columbia, Finance Minister Bill Morneau said Wednesday.

Morneau said Ottawa is willing to compensate the pipeline’s backers for any financial loss due to B.C.’s attempts to obstruct the $7.4 billion project, which was approved by the Trudeau Liberals in November 2016.

The 1,150-kilometre pipeline built in 1953 currently carries about 300,000 barrels of oil per day from northern Alberta to the oil terminal in Burnaby, a suburb of Vancouver.

The project to expand the pipeline is expected to nearly triple its capacity to 890,000 barrels per day, raising concerns among opponents of the project of possible oil spills, as well as increased tanker traffic in the narrow waterway.

“The indemnification would allow Kinder Morgan to finish what they started, what they received federal and B.C. approval to do,” Morneau told reporters during a news conference in Ottawa that laid out in broad terms what the Liberal government is willing to do to move the stalled project ahead.

Kinder Morgan has threatened to abandon the project if a clear path forward isn’t reached by May 31.

“If Kinder Morgan isn’t interested in building the project we think plenty of investors would be interested in taking on this project, especially knowing that the federal government believes it is in the best interest of Canadians and is willing to provide indemnity to make sure that it gets done,” Morneau said.

Morneau took aim at B.C. Premier John Horgan, placing the blame for the current “exceptional situation” on his shoulders, calling the delay deliberate and “politically motivated.”

“I think that is rhetoric and hyperbole on his part. There are fundamental challenges to that project that he well knows,” Horgan responded to Morneau’s comments.

“From the beginning, pipeline opponents have sought to exhaust investors into submission by throwing up legal roadblocks. That strategy doesn’t work if the project is backed by the Canadian people,” she told reporters in Edmonton.