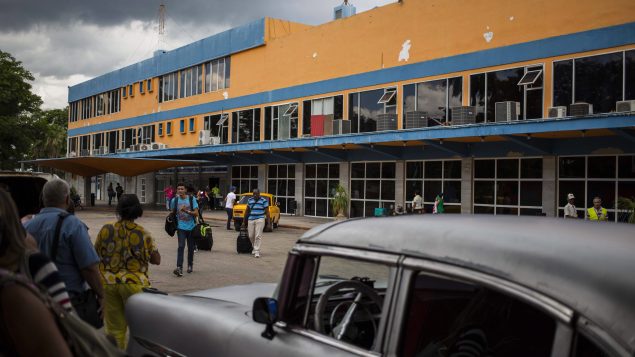 Travelers walk outside Jose Marti International Airport Terminal 1 in Havana, Cuba, Saturday, May 19, 2018. Investigators are trying to determine why an aging Boeing 737 carrying more than 100 people went down and erupted in flames shortly after takeoff in Havana. (Desmond Boylan/AP Photo)

Dozens of Canadians have been stranded in Cuba after Cuban authorities grounded dozens of flights in the wake of a plane crash that claims the lives of 110 people on Friday.

Some complained that they have been unable to reach the Canadian embassy in search of consular assistance, despite the government’s promise to help Canadians affected by the tragedy.

Foreign Affairs Minister Chrystia Freeland, who extended Canada’s condolences to all those affected by the tragedy, said Canadian consular officials are in contact with Cuban authorities to obtain further information and stand ready to provide consular assistance to Canadian citizens if needed.

However, Michael Renard said he hasn’t been able to reach any Canadian officials.

“#governmentofcanada where are you???? 150 Montrealers stranded in Cuba and no one is helping us yet all those from Toronto all were able to go home!!!!” Renard posted on his Facebook page on Sunday. “#westjet #aircanada #airtransat why arent you helping us????? Canadian embassy isn’t even reachable!!!!!!” 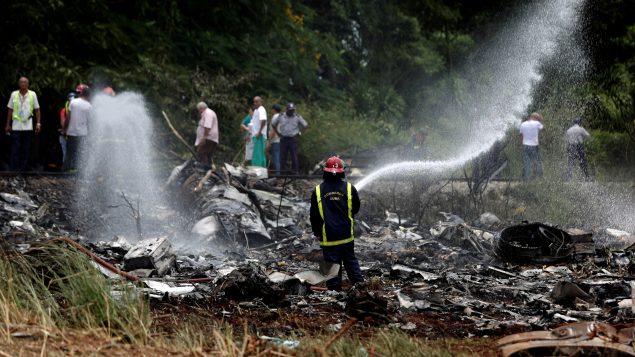 A firefighter works in the wreckage of a Boeing 737 plane that crashed in the agricultural area of Boyeros, around 20 km (12 miles) south of Havana, shortly after taking off from Havana’s main airport in Cuba, May 18, 2018. (Alexandre Meneghini /REUTERS)

The 39-year-old Boeing 737 that crashed was barred from Guyanese airspace last year after authorities discovered that its crew had been allowing dangerous overloading of luggage on flights to Cuba, Guyanese Civil Aviation Director Capt. Egbert Field told The Associated Press on Saturday.

The plane and crew were being rented from Mexico City-based Damojh by Easy Sky, a Honduras-based low-cost airline.

Cuba’s national carrier, Cubana de Aviacion, was also renting the plane and crew in a similar arrangement known as a “wet lease” before the aircraft veered on takeoff from Havana and crashed into a field just after noon Friday,  killing all but three of its passengers and crew members, according to Mexican aviation authorities.

Cuban Transportation Minister Adel Yzquierdo Rodriguez told reporters Saturday afternoon that Cubana had been renting the plane for less than a month under an arrangement in which the Mexican company was entirely responsible for maintenance of the aircraft.

Armando Daniel Lopez, president of Cuba’s Institute of Civil Aviation, told the AP that Cuban authorities had not received any complaints about the plane in that month. He declined to comment further.