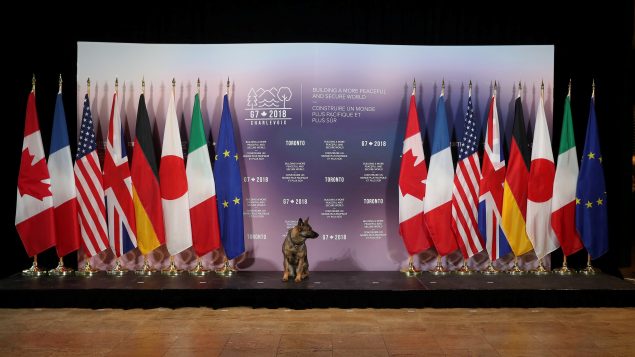 Royal Canadian Mounted Police security dog waits for the arrival of security ministers and foreign ministers ahead of a group photo on the second day of meetings for foreign ministers from G7 countries in Toronto, Ontario, Canada April 23, 2018. (Fred Thornhill/REUTERS)

G7 experts meet in Quebec ahead of the Charlevoix Summit

Representatives from think-tanks and academia from G7 members and other countries have gathered at Université Laval in Quebec City for the Think7 (T7) Summit organized by the Hautes études internationales (HEI) ahead of the upcoming G7 leaders’ summit hosted by Canada.

Canada assumed the rotating presidency of the informal grouping of seven of the world’s advanced economies in 2018 and will host the leaders of France, Germany, Italy, Japan, the United Kingdom, and the United States at a leaders’ summit that will take place in Charlevoix, Quebec, from June 8-9.

Prime Minister Justin Trudeau said Canada has chosen to focus its presidency of G7 on discussions on “finding real, concrete solutions to promote gender equality, women’s empowerment, clean energy, and economic growth that works for everyone.”

However, several international crises from Syria and North Korea to how to deal with resurgent Russia and China are also expected to be discussed at the meeting.

Louis Bélanger, Director of HEI, said during three working sessions, T7 participants will discuss the priorities set by the Canadian G7 presidency, as well as the complex challenges that leaders face when addressing global issues and international cooperation.

“Building on these priorities, we have identified six traditional areas we wish to address: trade, labour, environment, security and migration, and gender equality,” Bélanger said in a statement.

“Instead of addressing these six areas one by one, the discussions will provide analysis and advice on their interconnections and the converging nature of global issues.”

G7 Research Group director John Kirton said the experts’ recommendations will be synthesized into the Think7 Declaration, which will be presented to the G7 sherpas at their meeting in Baie-Saint-Paul. It will be published on the G7 Information Centre website at www.g7.utoronto.ca and at the Universtité Laval’s website at ulaval.ca/t7.

“I am proud to gather with global thought leaders in the new T7 to offer inclusive, synergistic solutions for the G7 sherpas to present to their leaders as they enter the final negotiations for the Charlevoix Summit,” said Kirton.