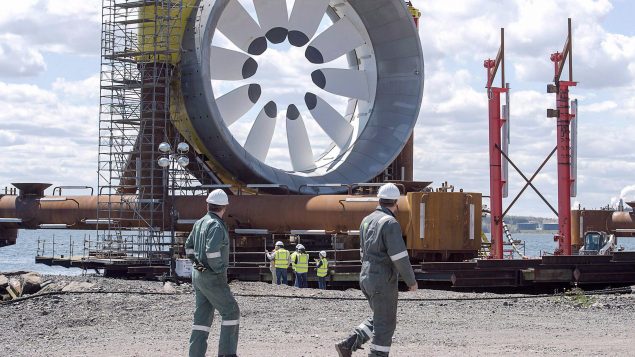 A turbine for the Cape Sharp Tidal project is seen at the Pictou Shipyard in Pictou, N.S. on Thursday, May 19, 2016. A massive underwater turbine started generating electricity from the world's highest tides in the Bay of Fundy in May of 2016, a test project the Nova Scotia government says marks a turning point for Canada's renewable energy sector. (Andrew Vaughan/THE CANADIAN PRESS)

“Canada has been working hard, both at home and abroad, to lead the transition to a low-carbon future. Canada is a global leader in renewable energy and today, we are pleased to take further steps to grow its production across the country,” said Kim Rudd, Parliamentary Secretary to Canada’s Minister of Natural Resources, speaking at the ninth Clean Energy Ministerial in Copenhagen.

According to figures released by IRENA, over two-thirds of Canada’s electricity comes from renewable energy sources, and solar and wind are the fastest-growing sources of electricity in the country.

For example, wind accounts for 5 per cent of electricity generation in Canada, according to IRENA.

As a member of IRENA, Canada will benefit from increased awareness of the economic potential of the renewable energy, as well as international trade opportunities for Canadian clean tech companies that are getting ready to tap into a market set to grow to a $1-trillion global investment opportunity per year by 2050, officials said.

Canada is in the 14th place in a ranking of the top 40 renewable energy markets worldwide, according to a report by UK accountancy firm Ernst & Young released earlier in May. China, the United States and Germany top the list of the most attractive countries for renewables investment.

Since its inception in 2011, 181 countries and the European Union are engaged in IRENA’s work.