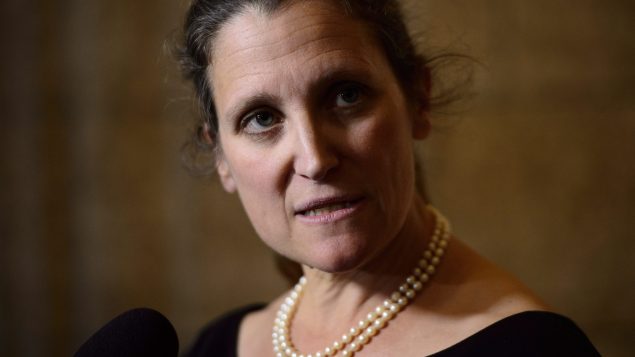 Canada pushes for exemptions on Canadian steel and aluminum imports

Ottawa is pushing for exemptions for Canadian steel and aluminum producers ahead of Friday’s deadline that could see Washington slap punishing tariffs on steel and aluminum imports into the United States, Foreign Affairs Minister Chrystia Freeland said Wednesday.

Speaking to reporters following her trip to Washington Freeland said she discussed several times the issue of aluminum and steel tariffs, as well as NAFTA, during her meeting Tuesday in Washington with Trump’s trade czar Robert Lighthizer.

“Canada considers it frankly absurd that we would in any way be considered to be a national security threat to the United States,” she said of the tariff threat, which comes under Sec. 232 of the U.S. Trade Expansion Act.

Also when it comes to trade in steel and steel products, the U.S. has a surplus in trade with Canada, Freeland said.

“I would like to absolutely assure Canadians, particularly those that work in the steel and aluminum industries, that the government is absolutely prepared to and will defend Canadian industries and Canadian jobs. We will respond appropriately.”

Earlier in the day, the Prime Minister’s Office revealed that on Tuesday Prime Minister Justin Trudeau pushed for an exemption on Canadian steel and aluminum imports to the United States during his phone call with Vice-President Mike Pence.

Nevertheless, Freeland left Washington without any firm guarantees that Canada will be exempted from tariffs.

Canada, the U.S. and Mexico are also working to get a deal on a renegotiated North American Free Trade Agreement in time for the current iteration of the U.S. Congress, and ahead of what’s expected to be a turning-point election in Mexico on July 1.

Freeland said while the government doesn’t want to get boxed in by deadlines imposed by the U.S. congressional calendar, Ottawa remains optimistic that a deal is within reach.

“We are very intensely engaged,” Freeland said. “We think a win-win-win outcome is absolutely possible for all three countries. Having said that, what Canada is looking for is a good not any deal.”