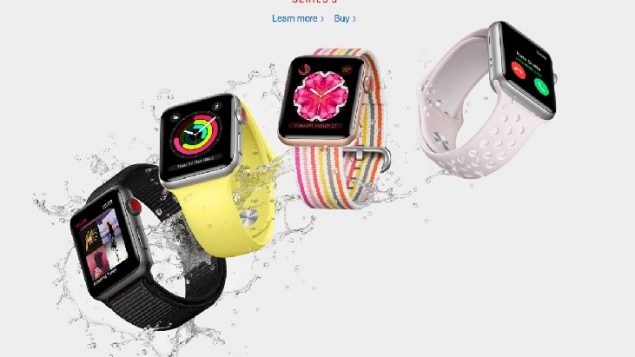 Driving using an e-watch could be like using a mobile phone. Distracted driving charge, $400. Photo: Apple

A university student in Ontario found out the hard way there is an unexpected drawback to her hi-tech Apple watch, or “iWatch”.

The University of Guelph student was been charged under the province’s stiff “distracted driving” law.

That section under the Highway Traffic Act was amended in 2009 to deal with the growing use of mobile phones while driving to include the phrase “while holding or using a handheld wireless communication device.”

In spite of the multi-function capability of the wrist device, student Victoria Ambrose said she was only checking the time and her lawyer argued the mobile phone aspect didn’t apply in this case as it requires someone to tap the device to activate the display and tap again to deactivate. She also argued it wasn’t connected to an external communication device.

The officer who gave her the ticket, said Ambrose was stopped at a traffic light while he was in his police car beside her. He noticed a small glow in the car and the driver looking down four times. The officer testified that when the light turned green and cars ahead of her moved off Abrose didn’t and only reacted when he shone a light into her car.

“Cellphone taped to her wrist”

In spite of her testimony the Justice of the Peace rejected the arguments of tapping to activate and deactivate the device, that it wasn’t connected to an external communication device, and that the fact that it was on her wrist (ie not held in the hand) satisfied the exemption for devices that are securely mounted in the vehicle. (hands free).

The Justice of the Peace said checking the time normally only takes a moment even with the “tapping”.

Justice of the Peace Lloyd Philipps said “Despite the Apple Watch being smaller than a cellular phone, on the evidence, it is a communication device capable of receiving and transmitting electronic data. While attached to the defendant’s wrist, it is no less a source of distraction than a cellphone taped to someone’s wrist,”

He noted that in the law, the determination is that of driver distraction, and that from the officer’s testimony that Ambrose was clearly distracted.

Ambrose’ lawyer noted that with the great changes in technology such as the iWatch, and other wearable tech like computer eyeglasses, the law will have to keep up and be more specific about what can and cannot be done in connection with tech devices. 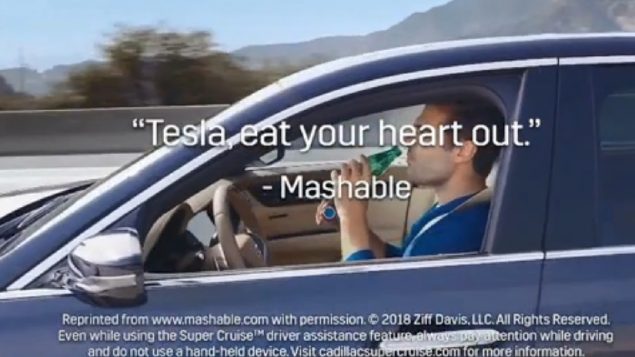 Cadillac CT-6 television commercial showing autonomous drive. A comment to the news story wondered how police would interpret the “driver” with hands off the wheel and eyes distracted while drinking a beverage. Though the advert shows different, the disclaimer at the bottom notes that even with “Super Cruise” option one should “always pay attention and do not use a hand-held device” Screen-grab from Cadillac commercial