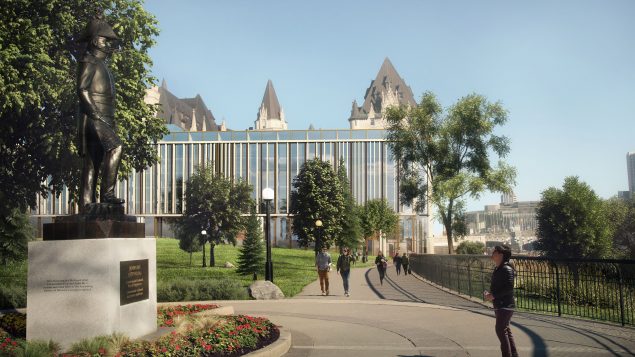 An image of the proposed seven-storey addition at the rear of the Chateau Laurier. (Dennis Jacobs/Momentumplancom)

A heritage preservation group is lambasting the proposed ultra-modern addition to Ottawa’s landmark Chateau Laurier hotel built in the French Gothic style as “the most disgraceful act of heritage vandalism of our generation.”

But the lead architect on the project to add a seven-storey glass and metal addition to the early 20th century limestone building says a contemporary approach, as opposed to mimicking its Edwardian style, is the best way to respect the property’s heritage.

Heritage Ottawa says it unimpressed by the latest proposal to build an addition next to the venerable historic hotel, a National Historic Site of Canada.

The preservation group says it “is gravely concerned that the City of Ottawa may be on track to approve what would be the most disgraceful act of heritage vandalism of our generation.” 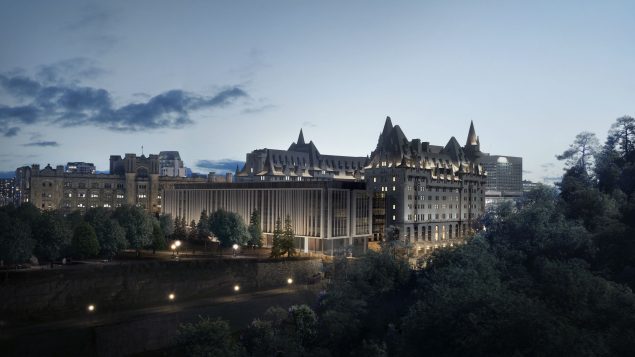 View of the proposed addition to Chateau Laurier from Parliament Hill. (Dennis Jacobs/Momentumplancom)

The Toronto-based firm archtectsAlliance says in its latest submission to the City of Ottawa that it has made several modifications to its original plan which sought to build two pavilions of 11 and 12 storeys containing 218 rooms, triggering an intense backlash when it was first unveiled in December of 2016.

The most recent iteration reduces the addition’s height to seven stories in order to preserve views of the hotel, it also incorporates more Indiana Limestone and bronze, according to the architectural firm’s submission.

But Heritage Ottawa says the changes aren’t enough to overcome the structure’s fundamental clash with the chateau, which conveys “a sense of romance, mystery, excitement, unpredictability and splendour.” 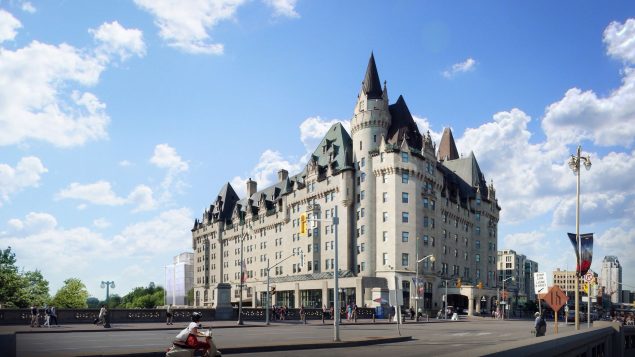 “The revised design fails to resolve—or even address—the underlying flaw that impaired all of the previous attempts,” Heritage Ottawa says in a statement. “The angular, blocky massing and style of the proposed addition remains intrinsically incompatible with the romantic sensibility of the historic Château.”

Speaking to The Canadian Press, Peter Clewes of Toronto-based firm architectsAlliance, who is the lead architect on the project, said they trying to design “a building of our time.”

“When you’re dealing with a building of national historic significance, you don’t want to confuse history,” Clewes said. “Our focus has been trying to create a building that’s deferential to the hotel, and allows it a clear legibility of the hotel itself — what is historic and what is new.”

Ottawa City Council is slated to discuss the project later this month.