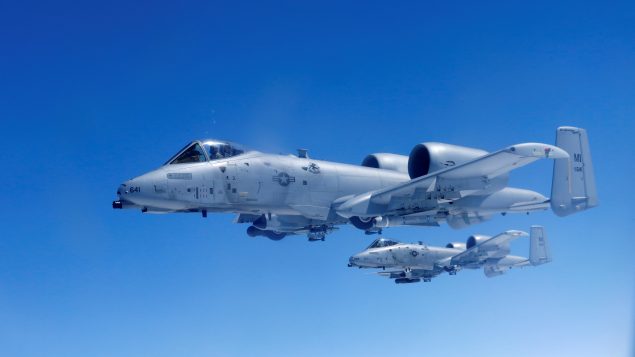 Faced with “more assertive Russia,” NATO defence ministers are expected to agree to new measures aimed at bolstering the alliance’s ability to respond to new threats on land, on the high seas and in the cyber space, NATO Secretary General Jens Stoltenberg announced Thursday.

Defence ministers from 29 NATO members, including Canada’s Harjit Sajjan, are meeting at NATO headquarters in Brussels for two-day talks set to approve beefing up personnel numbers at the alliance’s two new commands: the Atlantic Command in Norfolk, Virginia, and another one in Ulm, Germany to support military mobility in Europe.

Ministers are also set to approve a new initiative, dubbed the “Four Thirties,” to ensure that by 2020 NATO is able mobilize 30 land battalions, 30 air squadrons and 30 combat vessels within 30 days or less, Stoltenberg said.

“Because in a more unpredictable world, we need to be sure we have the right forces in the right places at the right time,” Stoltenberg said. 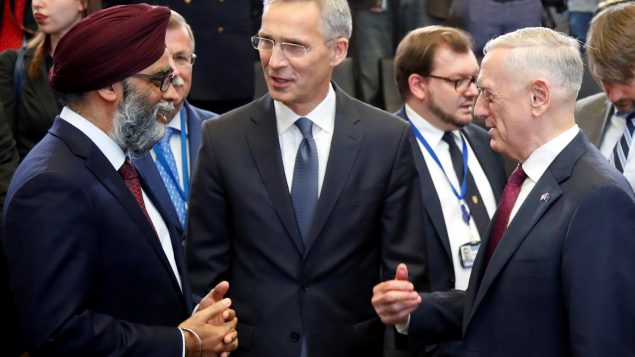 Speaking to Radio Canada International from Brussels, Sajjan said it’s too early to know what Canada’s contribution to this “Four Thirties” initiative will look like.

“We have to go through the appropriate assessment, we have to make sure that we have the right military advice and once we have that down, then we’ll be able to move forward on that,” Sajjan said.

(click to listen to the interview with Harjit Sajjan)

Canada is already contributing to and leading NATO’s enhanced forward presence battle group in Latvia, it has kept a navy frigate in the Mediterranean on an almost constant basis and has stepped up its contribution to the periodic air policing as well, Sajjan said.

The new “Four  Thirties” initiative will also be discussed by NATO heads of state during the NATO Summit in July, Sajjan said.

Rob Huebert, a professor of political science at the University of Calgary and a senior research fellow with the Centre for Military and Strategic Studies, said the “Four Thirties” initiative is based on a recognition that NATO doesn’t have enough boots on the ground to act as a deterrence on the alliance’s eastern front.

“If you listen to the Eastern Europeans and particularly to the Baltics and the Poles, and the two unofficial NATO members the Swedes and the Finns, all of the Russian behaviour is getting worse,” said Huebert.

The enhanced forward presence battle groups deployed by NATO in Poland, Estonia, Latvia and Lithuania have provided enough forces to ensure that if Russia embarks on a military adventure, that NATO will be involved, Huebert said.

“In other words, what we have provided is a tripwire,” Huebert said. “The ‘Four Thirties’ is to provide the true response.”

‘NATO is not afraid’ 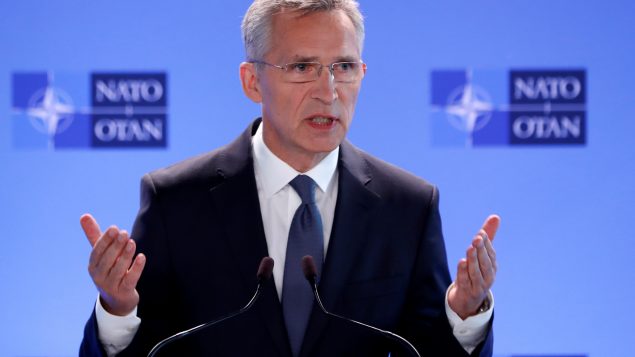 Other initiatives on the agenda of the NATO defence ministers meeting include reinforcing the alliance’s maritime posture, to respond in part to the increased Russian activity in the Mediterranean, and efforts to speed up the deployment of troops and equipment across Europe.

“NATO is not afraid,” Stoltenberg said. “But NATO has to adapt, and NATO has to make sure that we continue to remain the most successful alliance in history.”

The only way to do that is to be able to respond to new challenges, and change when the world is changing, he said.

“And now the world is changing” Stoltenberg said. “We see a more assertive Russia, we see a lot of instability, violence in the Middle East and North Africa, close to our borders, we see proliferation of weapons of mass destruction, and we see cyber threats.”

“I welcome the fact that European Allies and Canada have turned the corner,” he said. “After years of cutting defence spending, they have now started to increase.”

However, Canada, which spends about 1 per cent of its GDP on defence, is still far from NATO’s 2-per-cent defence spending goal.

The meeting will also address NATO training missions in Iraq and Afghanistan, as well as the possibility of beefing up assistance Jordan and Tunisia, which are dealing with threats from Daesh.

Canada was forced to freeze its active training of peshmerga Kurdish forces after the referendum on independence from Iraq resulted in clashes between Iraqi government forces and Western-trained Kurdish forces.

“We’re looking at various other partnerships with the Iraqi security forces,” Sajjan said.

Canadian trainers have also been active in Jordan where the provided Jordanian Armed Forces with Joint Terminal Attack Controller with three training courses (JTAC) that teach highly skilled soldiers how to call in and direct aerial and artillery attacks.

Canada is currently reviewing NATO’s capacity building program in Tunisia, which is dealing with the spillover of instability in neighbouring Libya, and has yet to take a decision on a possible contribution, officials said.