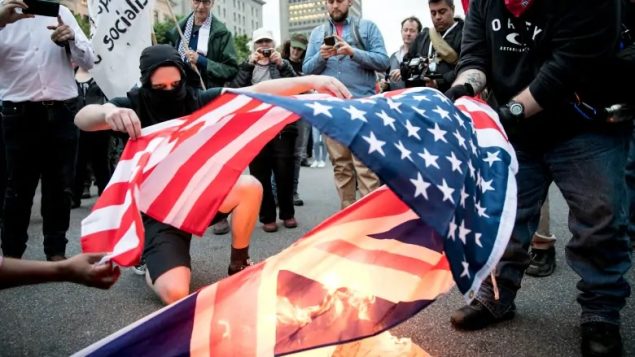 Given the possible threat of terrorist action, and the known violence of some groups of protesters, the police and security presence is massive in the provincial capital and meeting area about 140 km further up the St Lawrence at the town of La Malbaie.

Many in Quebec City recall the protests in 2001 at the Summit of the Americas which resulted in a great deal of damage to property by protesters. 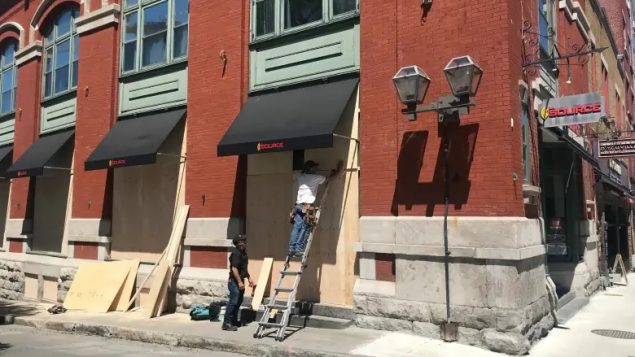 With memories of the vast vandalims of the 2001 Summit of the Americas, Quebec City businesses boarded up windows and doors and closed for the next few days Photo: Alexandra Duval Radio-Canada

Due to police blocking access to the meeting site upriver, protesters have been essentially limited to travel only as far as Quebec City and many businesses there have boarded up their windows and closed for today and the weekend. The provincial government and the Quebec Assembly building have also shut down for security reasons

Prior to the meetings one known extreme leftist and Quebec separatist group the ‘Reseau de Resistance du Quebecois”  held workshops in Montreal for protesters under the headline “prepare for war”. The workshops however were mostly to inform of rights. 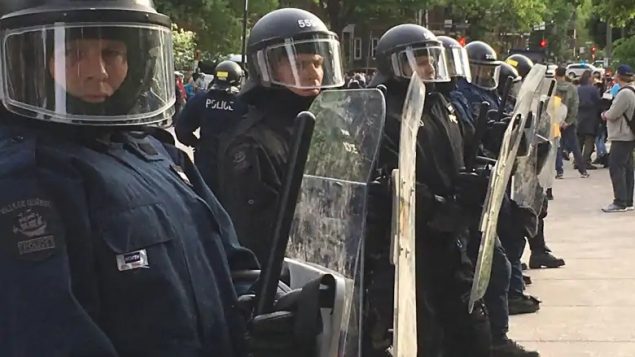 Vast numbers of police and other security measures on in place in Quebec City, and all around the meeting site 140km away. In spite of calls for a “day of disturbance” by radical groups, police so far have things under control. Photo: Luc Hains Radio-Canada

On the eve of the meeting, demonstrations were held in Quebec City  which were generally without incident other than some flag burning and street marches of about 500 people. 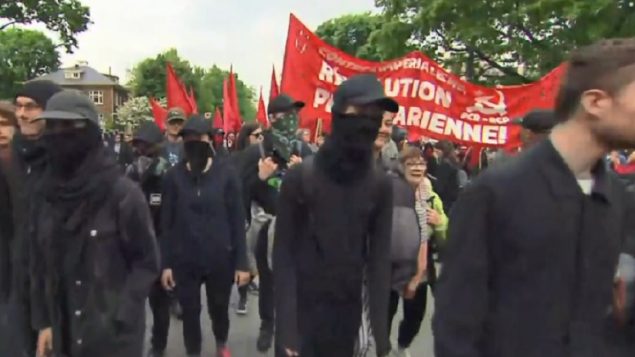 A relatively peaceful march of about 500 took place in Quebec City on Thursday including many masked protesters. Photo CBC

Three people were arrested, one for a weapon, another for an incendiary device, and a third for making threats on the internet.

Today however the situation might be different as groups have called for disruption of the meetings, beginning earlier today with an attempt to block the route leading to Malbaie and the meeting site.

CBC video of march (after commercial)