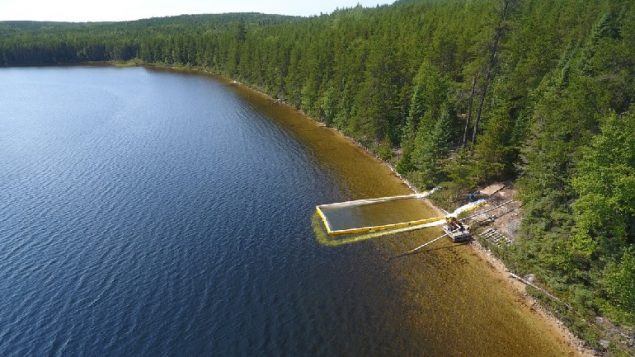 View of Phase 2 of the research on the effects of oil on freshwater ecosystems. A section of lake has been carefully enclosed along with a small section of shoreline for the experiment (IISD-ELA)

We have always recognised that oil spills cause environmental damage, but a group of scientists in northern Ontario are deliberately creating oil spills to study the effects on freshwater environments.

There are several types of oil, from heavy tar to refined fuels.

Very common now is the product “dilbit” i.e. diluted bitumen. This is the heavy bitumen from the oil sands, diluted with lighter oils in order to be pumped through the massive network of pipelines in North America, and via railway tank cars

Although there have been many previous studies on the effects of oil spills on the environment, there are gaps in understanding long-term effects and natural recovery, especially in connection with dilbit and how the chemical mix changes over time in the environment.

Vince Palace, the IISD Experimental Lakes Area’s Senior Research Scientist said that although much research has been and is focussed on oil’s effects on the marine environment, less is known about effects on freshwater ecosystems.

The second involves cordoning off small sections of the lake from surface to bottom to study an oil spill effect of longer periods of time and effects on organisms such as bugs, fish, amphibians.

Phase three will involve clean-up methods and how they might affect the environment.

For the second actual lake phase, 1.25 litres of oil will be spilled into the enclosures comprising approximately 20,000 litres, and each will test the effects of different oils from dilbit to crude.

The longer term effects will be also be studied on residual oil which is always left even after clean up efforts. Comparing before and after this will look at effects on everything from soils, to microbes, algae, zooplankton, minnows and shore based plant life. 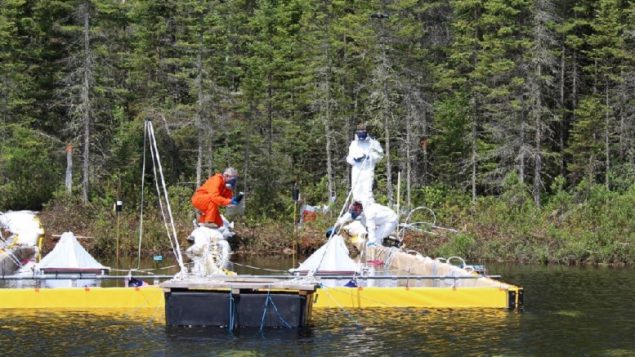 Researchers deliberately add a very small and controlled amount of dilbit or crude into the equally strictly controlled sections of an actual lake in order to study the effects on the ecosystem in the second phase of the study. (IISD-ELA / THE CANADIAN PRESS)

While lab tests and environmental simulations are certainly valuble they can’t determine effects and variable of inputs like sun, wind, rain waves and temperature variations which in turn are a complex interactive set of variables.

Quoted by the Canadian Press, Project collaborator Heather Dettman, senior scientist with Natural Resources Canada in Alberta, said the natural environment of the experimental lakes “is the next step up from the lab”.