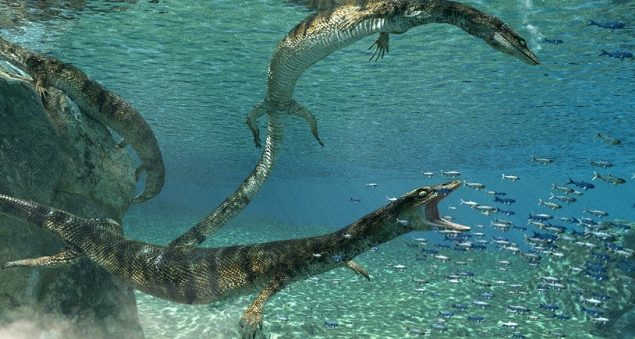 The Primitivus manduriensis is thought to have hunted in shallow waters of Puglia, Italy 70 to 80 million years ago. (Fabio Manucci)

Paleontologists at the University of Alberta have discovered a new species of ocean lizard that lived between 70 and 75 million years ago. The specimen is unique in that its muscle and skin is well preserved and scientists could even observe what looks like the remains of a fish meal in its stomach.

The fossil is a dolichosaur, a marine lizard related to snakes and mosasaurs. It was found in what was once a shallow water environment in Puglia, Italy. Scientists named it Primitivus manduriensis after the local Manduria variety of red wine grape called primitivo.

These marine lizards are described as small, long-bodies animals that look like regular lizards but have longer necks and tails. They have paddle-like hands and feet that enable them to swim but also move on land.

“There need to be very special conditions for soft tissue to be preserved on a fossil,” said PhD student Ilaria Paparella, lead author of the study in a news release. “The location where the Primitivus manduriensis was found has a great deal of potential. We hope to get permits from the Italian authorities to conduct further fieldwork.”

The paper detailing the discovery was published in Royal Society Open Science.